You are here: Home Newsroom Features Iconic Innovations: The Boots 'Day & Night' store that stayed open during the Blitz

For this month’s ‘Iconic Innovations’ we’re focusing on our Piccadilly Circus store, which opened in 1925 and was the very first Boots store to be open 24 hours a day, seven days a week.

The ‘Day and Night’ store was ground-breaking in the fact that it offered a service that was built around improving access to healthcare, with Chairman John Boot claiming at the time that the store was “instituted primarily as a Dispensing, Drug and Surgical Service for the convenience of the public; it was not introduced as a volume proposition”. 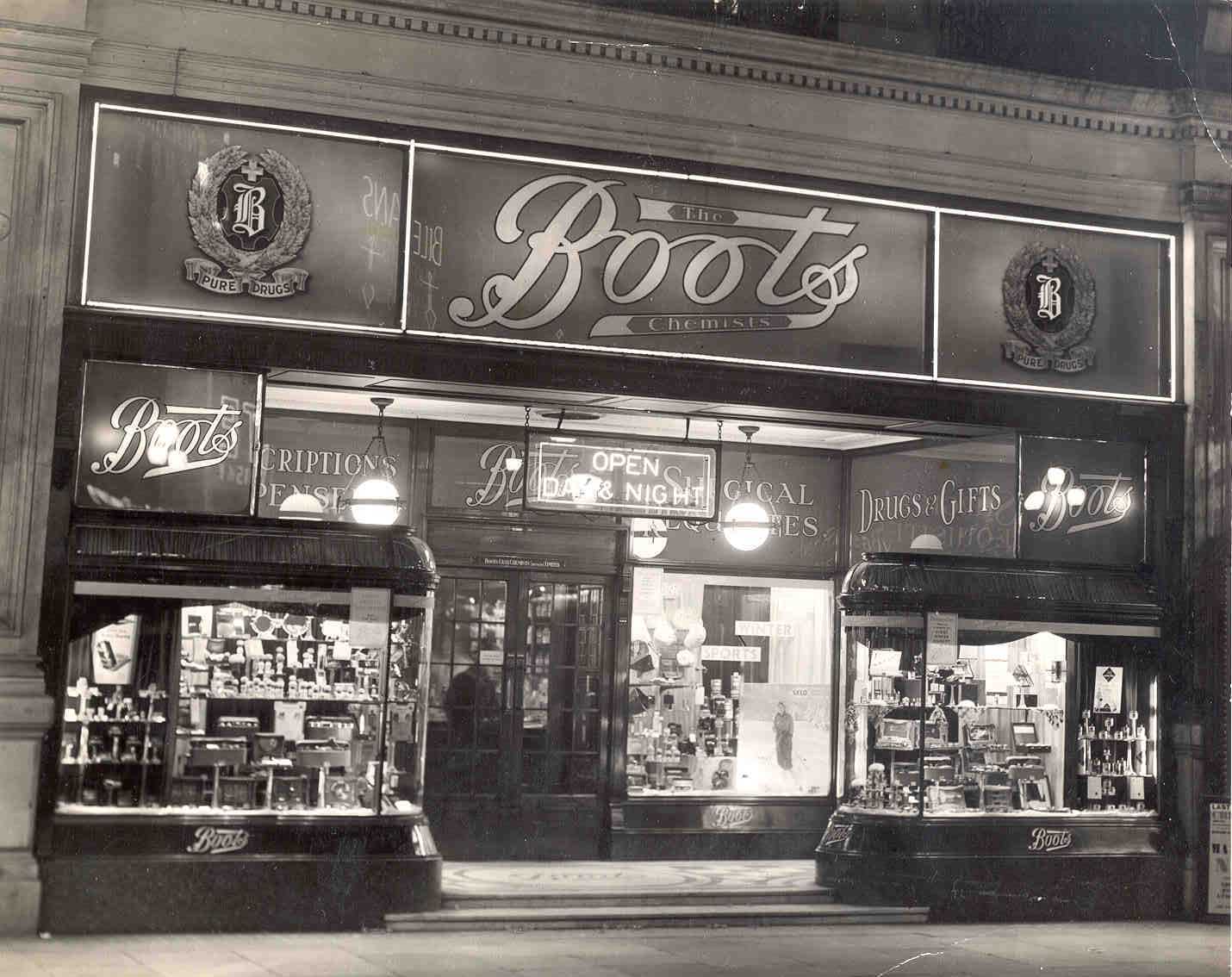 At the hub of the universe

Piccadilly Circus was chosen as the location of Boots first ‘Day and Night’ store due to its central location. At the time of opening Chairman John Boot explained that “we had not been satisfied with the facilities which we offered to those who required medicines out of shop hours. We decided that we ought to give a 24-hour service, seven days a week, so we finally selected Piccadilly Circus as being an address known to all, and convenient for bus and tube”.

The location meant that the store was frequently called upon to dispense urgent prescriptions for patients in rural and provincial locations, sometimes over 200 miles away. Stories were regularly included in Boots advertising that detailed how calls for lifesaving medicines had been made to the Piccadilly store in the middle of the night and the staff had moved quickly to dispatch the prescription on the last train out of London, arriving in the early hours of the morning and ultimately saving patients' lives.

One of the most high-profile examples of the store providing an urgent service occurred in 1953 when Dr Michael Ward, the medical officer for the Everest expedition being undertaken by Sir Edmund Hillary and Tenzing Norgay, realised they were short of supplies which were needed before they left for Asia the following day.

One of the requests was for Boots Mylol insect repellent cream, which at that point only came in glass jars and would have been too heavy to carry and liable to break. The Piccadilly store urgently got to work and arranged for the product to be packaged in lightweight tubes and successfully managed to get these to the expedition before it departed the next day, going on to be used on the first successful ascent of Everest. 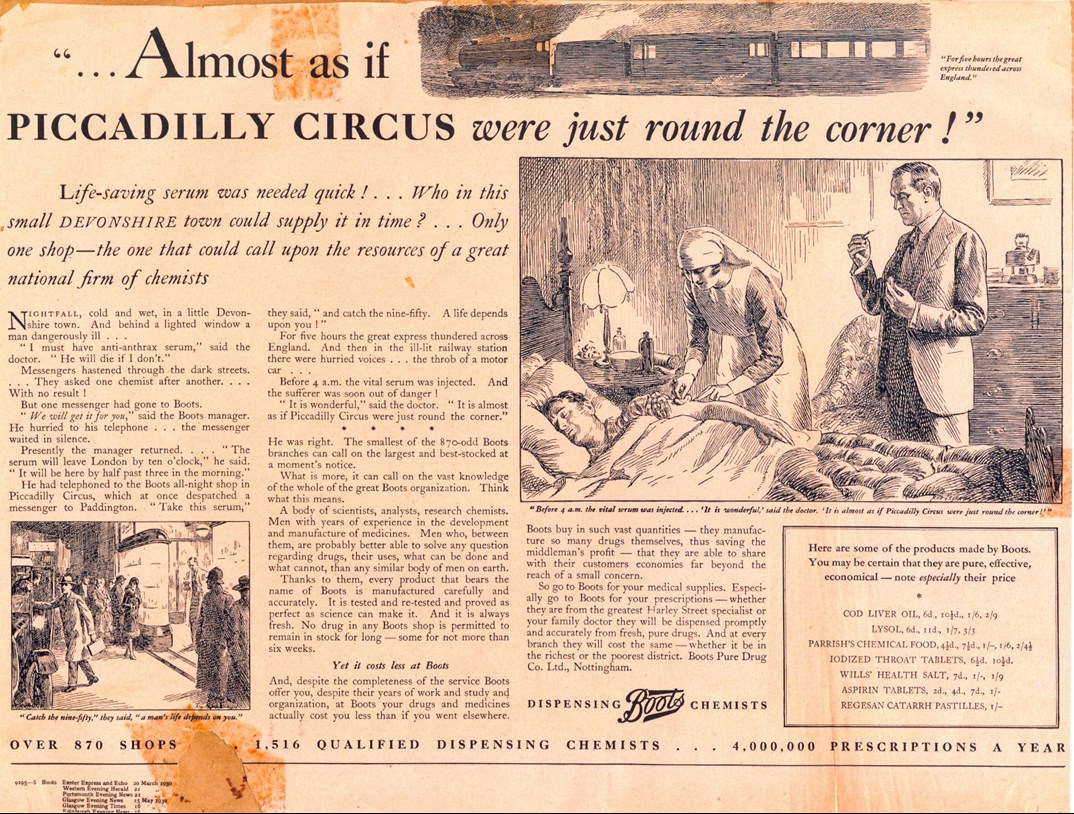 The prominent location also meant that it appealed to a wide range of customers. City workers would often drop their prescriptions off in the morning on the way to work ready to collect them at lunchtime, before gradually being replaced by shoppers seeking to find out whether the West End stocked a different range of products than their local pharmacy.

In the evening the store frequently catered for patients with headaches and stomach aches (both self-inflicted and through illness) and the early hours of the morning were used to fulfil many of the urgent orders that were placed when other chemists were closed. Importantly, charges for prescriptions remained the same regardless of the time of day they were dispensed.

The store was also popular with tourists and holidaymakers visiting the capital, and advertisements often included information in other languages including French, German and Danish. Dealing with so many different nationalities meant that the store held drug guides for countries all around the world, including America, Canada and India alongside references books for places as diverse as Australia, New Zealand, Hong Kong and South Africa. 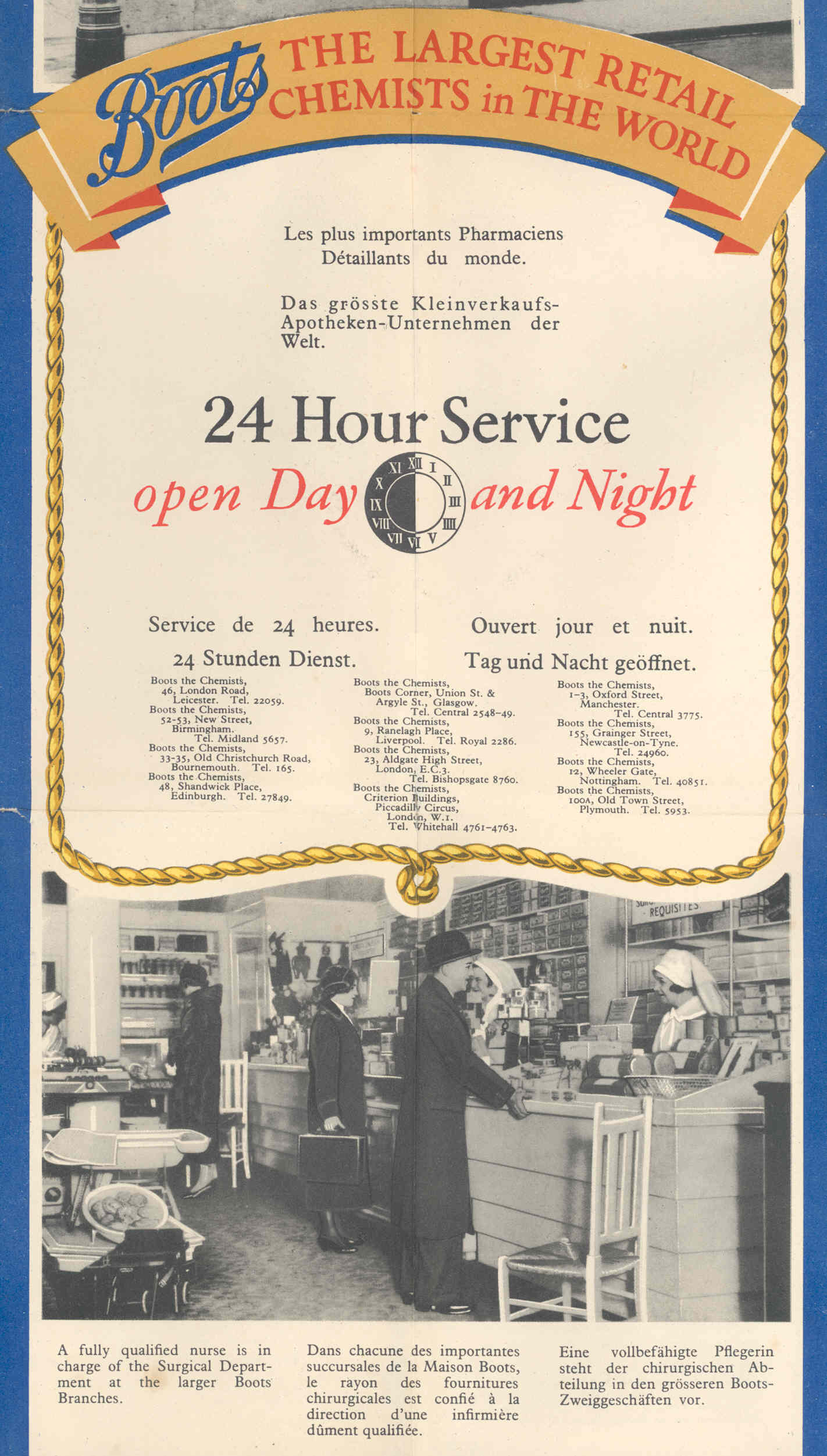 Advertisement for tourists in English, French and German, 1937

The store was also significant in that unlike most other pharmacies it included an aseptic dispensary, which allowed the team to create and prepare medicines in a completely sterile environment. This made the Picadilly Circus store an important hub in Central London and it was regularly called upon to produce high quality medicines that other chemists were unable to provide.

In the decades following the opening of the store, the 24 hour service continued to be a success for Boots, with a customer letter received in 1962 reflecting the general mood when it claimed in relation to the Piccadilly store. 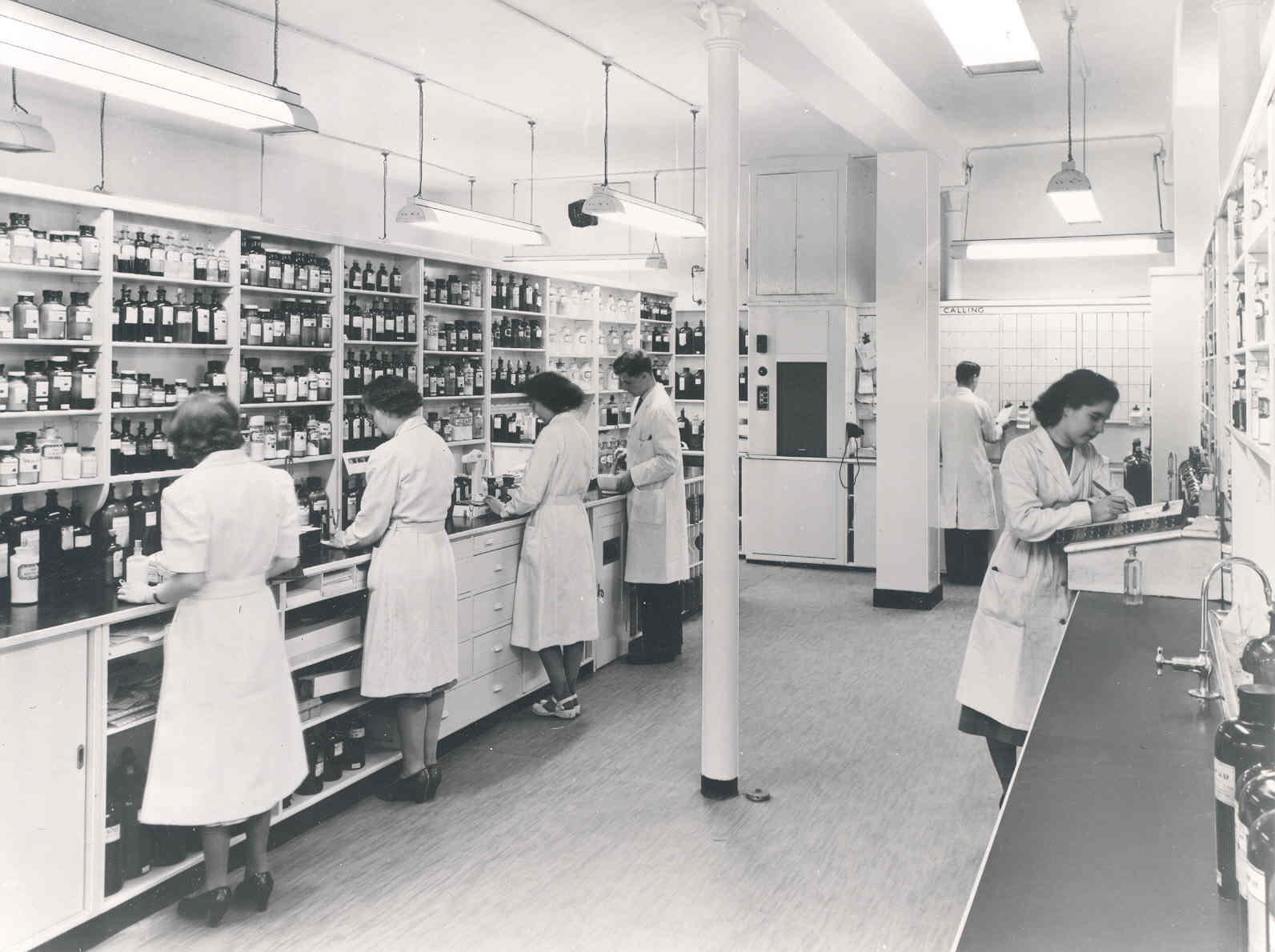 It read: “I can’t stress too strongly my gratitude to you as a firm for organising such a facility and to your dispensers and staff for their immense contribution to the welfare of the community”. The success of the Piccadilly store ultimately led to the opening of a number of other Day and Night stores in towns including Leeds, Liverpool, Manchester, Nottingham, Glasgow, Birmingham, Aldgate, Newcastle and Edinburgh, providing even greater access to healthcare across the nation.

The Piccadilly store ultimately closed on 7 November, 1979 and relocated to new premises on the other side of the Circus, marking the end of Boots Day & Night service. A combination of a decreased demand, security issues in the new premises and a fall in profitability meant that the Piccadilly Circus store was Boots first and last 24-hour pharmacy.

During the 54 years that it was open the store only closed briefly on two occasions – the first on the night of the Silver Jubilee of King George V in 1935 when large crowds outside the store resulted in a number of casualties, and the second during the 1970s when a bomb threat forced it to shut its doors temporarily. Remarkably, throughout the Second World War the area was blitzed at least eight times, but the store remained open and largely undamaged.

Today however, Boots have over 60 pharmacies nationwide that stay open until midnight from Monday to Saturday. 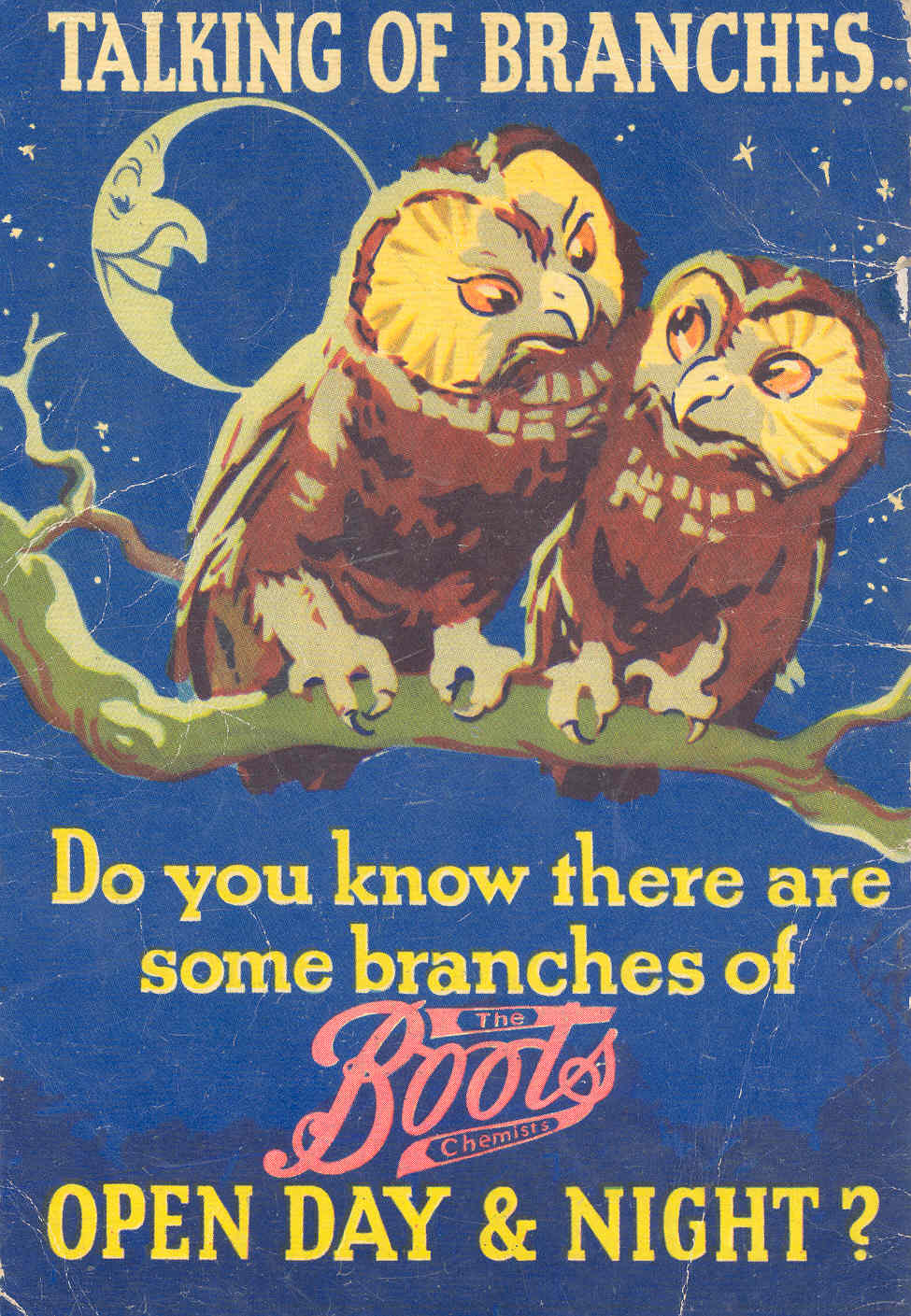