Each month, the Boots Archives Iconic Innovations series is looking back at an iconic Boots stores from the past 173 years to celebrate the amazing contribution Boots team members make to their local communities.

This month’s Iconic Innovations takes a closer look at Boots Royal Exchange store in Manchester, which opened in 1923 and was heralded as the largest chemists shop in the world. It provided customers with a shopping experience on a scale never seen before at Boots with over 15,000 square feet of sales area and included innovative offerings such as hairdressing and beauty salons and a qualified nursing service.

For over 50 years, Royal Exchange held the accolade of being the largest Boots store and inspired a range of other ‘wonder shops’ across the store network.

The Wonder Shop of the North 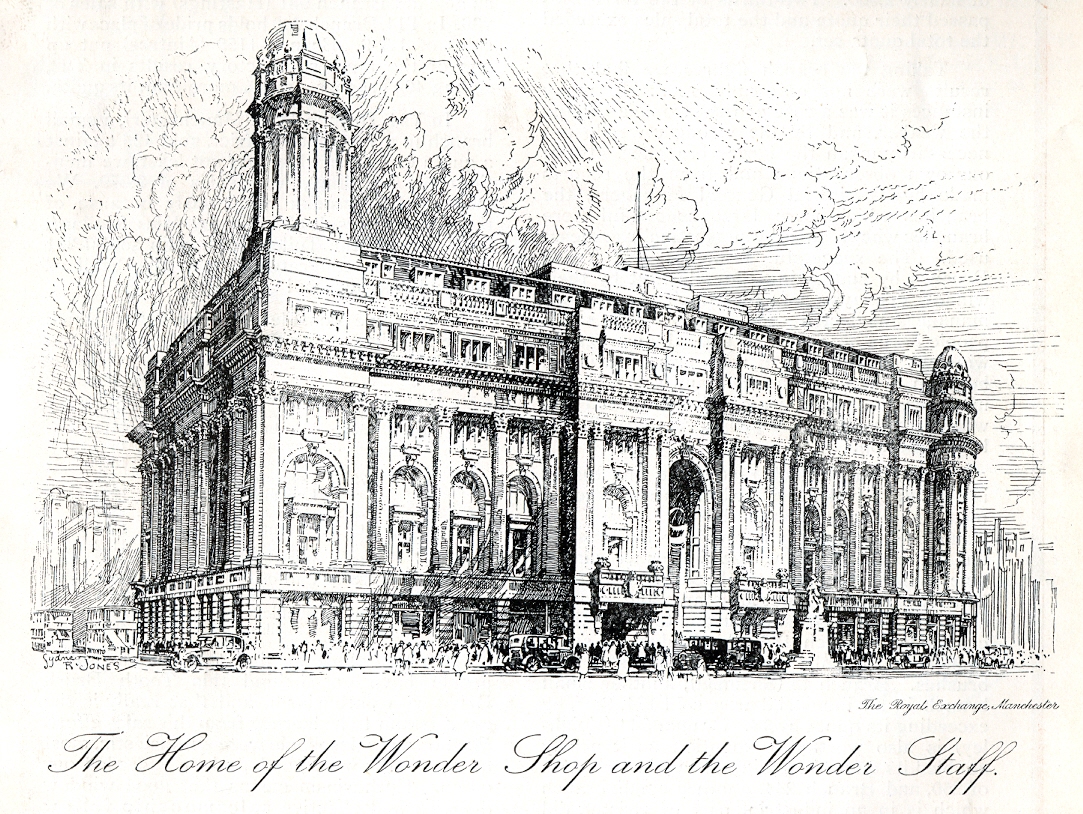 Boots Royal Exchange store opened on 8 June 1923 and was described at the time as ‘The Wonder Shop of the North’. Despite the 20s marking a period of high unemployment and economic difficulties, the store marked a real statement of intent for Boots, who were determined to provide new and bigger shops across the country to cater for a customer base that was beginning to see shopping increasingly as a recreational activity rather than an essential task.

On the opening day it was visited by around 30,000 people and over 12,000 orders were placed, with 4000 gifts being presented to the first customers. Boots staff magazine ‘The Bee’ reported that ‘When the doors were opened a tremendous wave of people surged across the floor, and took up their positions five and six deep at almost every counter’. 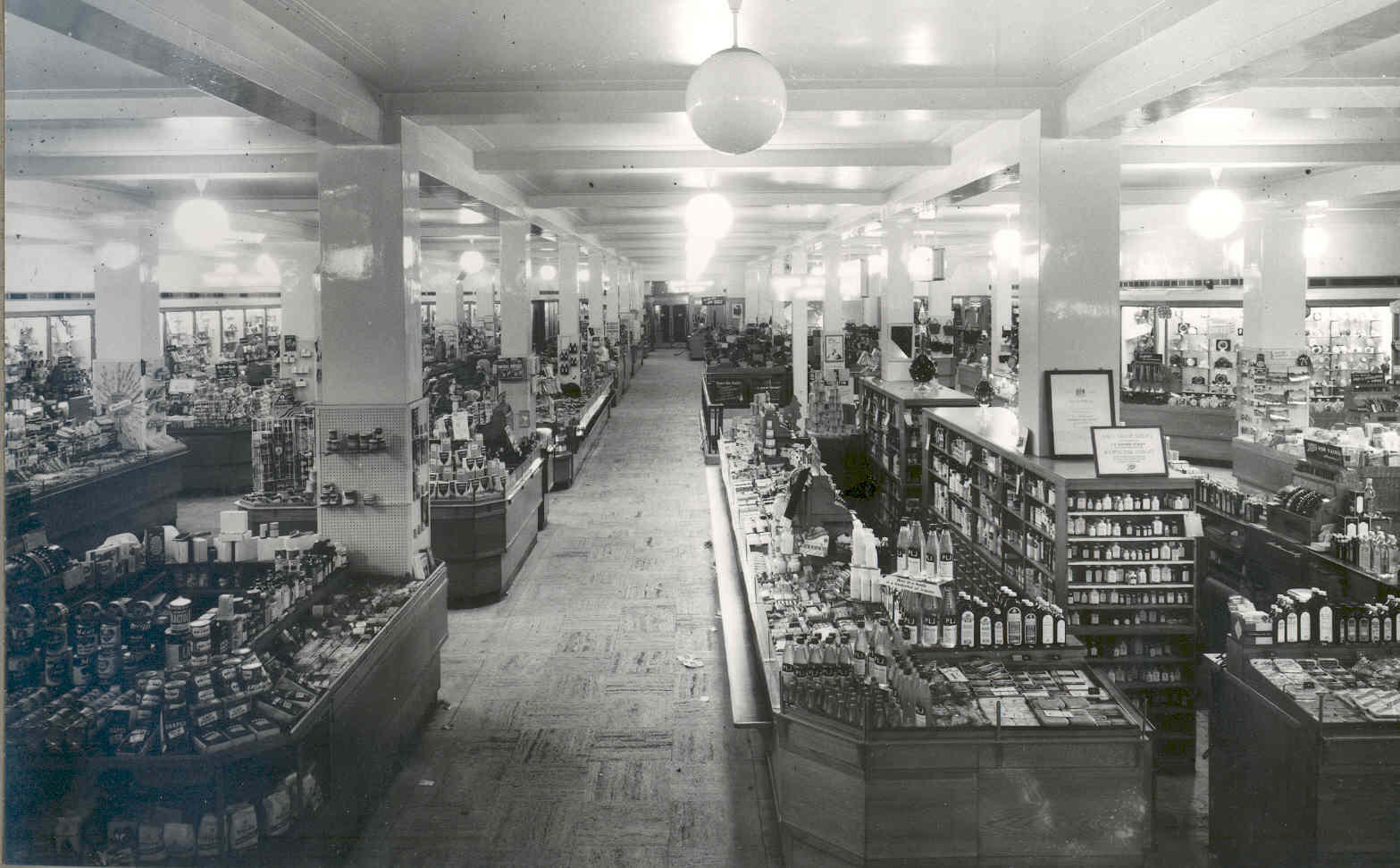 Upon entering the store, shoppers were welcomed into a foyer which was furnished beautifully with settees and palm trees and was described in the Nottingham Evening Post as ‘one of the most attractive novelties of the shop’. Customers were encouraged to sit without being pressed to buy, and a lounge was provided for both ‘the comfort and convenience of customers and the general public’. The store contained other social places where people could meet and interact including a ladies rest room, a smoke room, and a reading room which included magazines, a space to write letters and telephones.

Royal Exchange was also one of only a handful of Boots stores that offered a hairdressing service. Unfortunately, little information exists about the salon but it was considerable in size and did a reasonable trade, taking the equivalent today of roughly £200,000 annually and operating for over 13 years. Services like this built on the notion of Royal Exchange as a ‘one-stop-shop', where customers could visit for almost anything and everything, ranging from prescription to haircuts to gifts and perfumes. 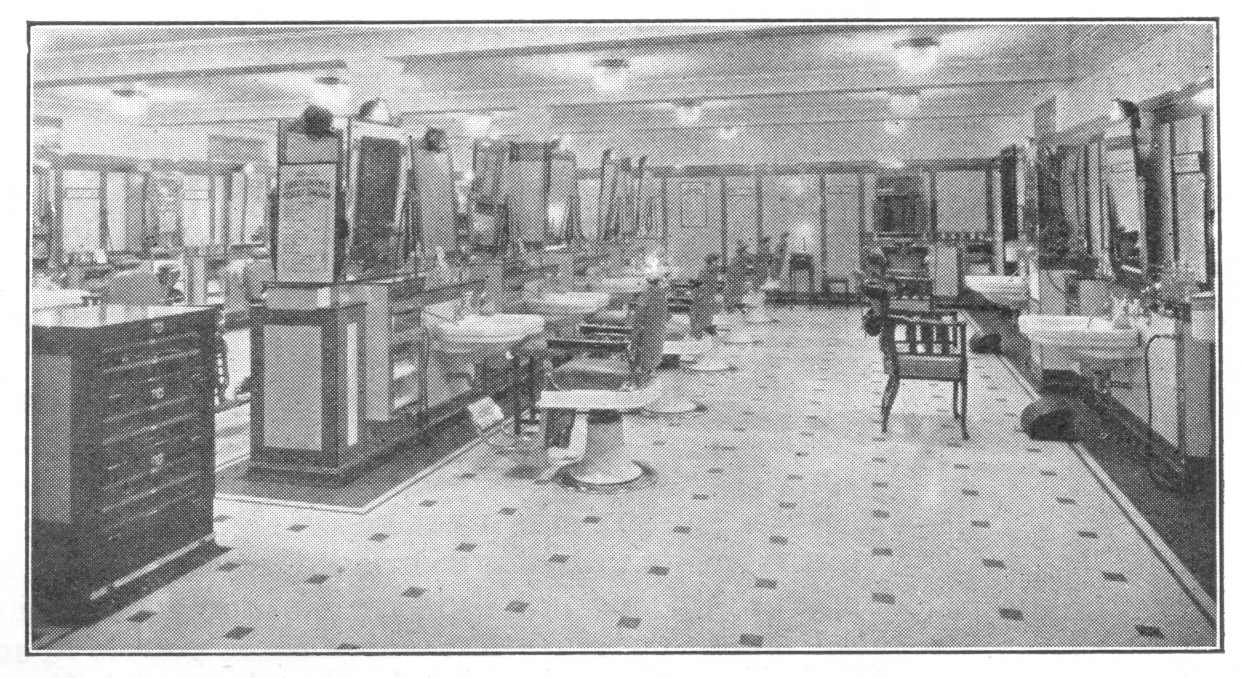 Shortly after the end of the First World War Boots were the very first chemists chain in the United Kingdom to introduce qualified nurses into stores, and Royal Exchange was no exception. Advertisements claimed that ‘A fully trained and certified nurse is in constant attendance to tender advice and assistant as required’, and they were able to support with both emergencies and general advice. This service was significant in the fact that it was introduced almost 25 years before the foundation of the National Health Service and offered customers a safe and affordable place to receive medical care from a qualified professional. By 1926 there were at least three qualified nurses working at the Royal Exchange store.

The rest of the enormous sales floor contained many of the more ‘traditional’ offerings such as the pharmacy, surgical and beauty departments, and each was ‘sumptuously fitted throughout and perfectly equipped’. To encourage customers into the store, Boots drew heavily upon the new American idea of sales promotion, where a line or brand was selected and in co-operation with the manufacturer was marketed heavily for a short period of time, supported with special window displays and sometimes commission for counter staff for extra sales.

In 1926, a Coty demonstration attracted actresses starring in the latest Charles Cochran show in Manchester, marketing the store as both a destination for local customers and visitors to the city. Interestingly, a clear point that advertisements from the time made was that prices were the same at Royal Exchange as in any other Boots store across the country, despite its grandness. 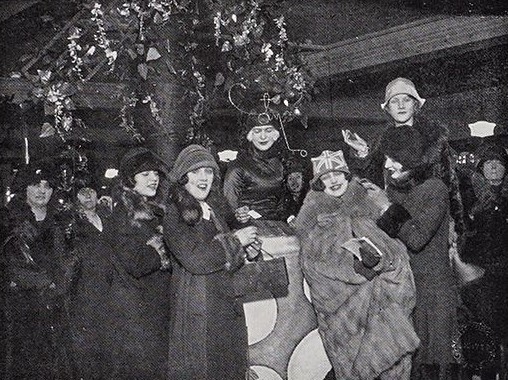 The success of the Royal Exchange store encouraged Boots to replicate the ‘wonder shop’ model, and throughout the 1920s and 1930s similar stores were opened in Lincoln, Leicester, Brighton, Ipswich and Bournemouth. All were built to an impressive size and scale and fitted to the highest standards, where customers were encouraged to spend time and not be importuned to buy.

In Manchester, the popularity of Royal Exchange continued over the decades, although it was forced to close for a period after it was bombed during the Second World War and sustained serious damage, not fully re-opening again until 1956. In that year it managed to pick up right where it left off and became the first Boots store to take a million pounds in a year. In celebration, all of the 300+ employees and an accompanying guest were invited to a celebratory ball, which was held at the Plaza Ballroom in Manchester, a fitting celebration for Boots first ‘wonder store’. 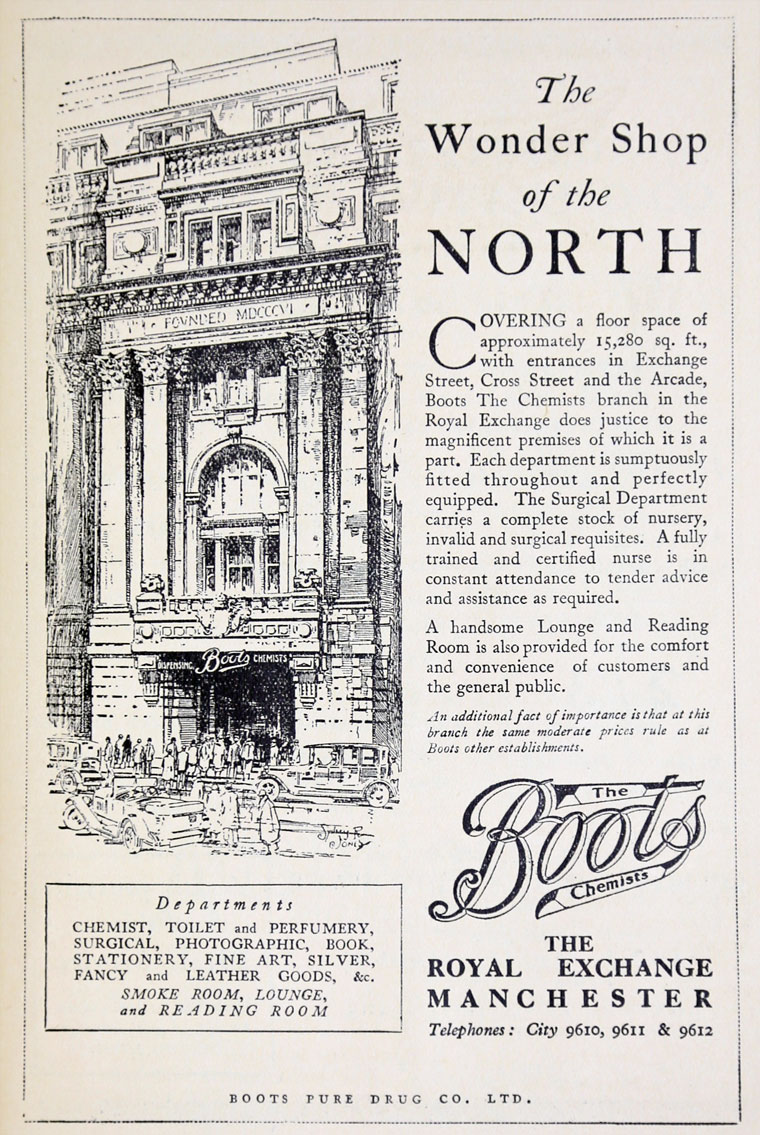