You are here: Home Newsroom Features Iconic Innovations: What was the first ever Boots department store like?

Throughout 2022, the Boots Archives Iconic Innovations series is taking a look at 12 historically significant Boots stores to celebrate the amazing contribution Boots team members make to their local communities.

This month’s Iconic Innovations takes a closer look at Boots Pelham Street store in Nottingham. Opened in the late nineteenth-century, Pelham Street was the first Boots department-style store, and its success led it to be used as a template for other Boots flagship stores in towns and cities across the country.

Growth of the store network

The success of Boots Goose Gate store led Jesse to look at expanding his business further, and in 1884 he opened branches in Sheffield and Lincoln. Nottingham, however, remained the focus of his attention and although the Goose Gate store continued to prosper, it stood away from the main shopping area and there was little room to extend.

In 1891 Jesse seized an opportunity to acquire a new premises on Pelham Street, just off Nottingham’s busy Market Square. The location of the store was ideal with plenty of passing trade, but Jesse was not happy with the design and layout of the building and took the decision to demolish it almost immediately and build a grand new shop on the site. 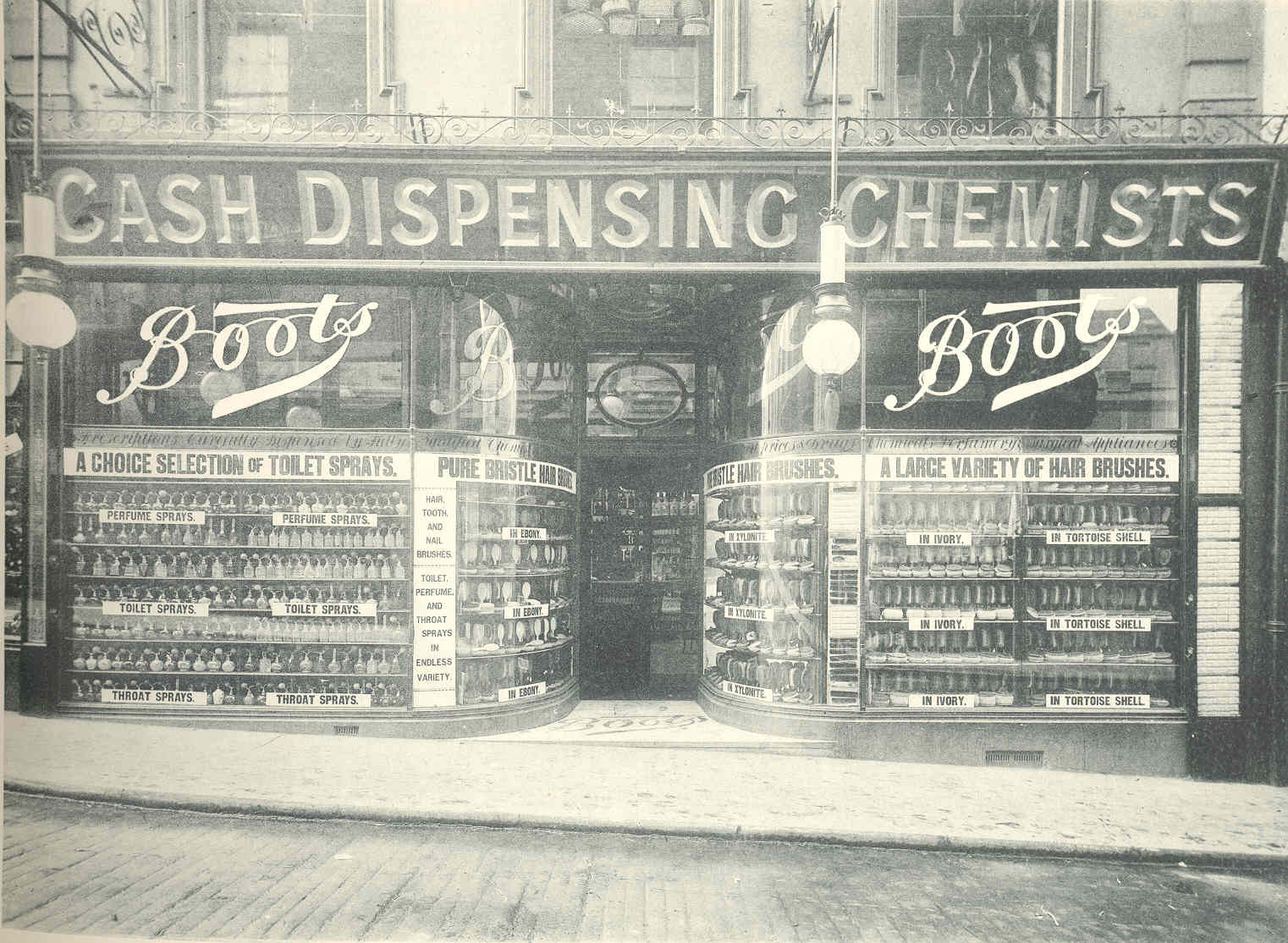 The new store opened in October 1892 and was Jesse’s most ambitious to date, creating an imposing and stylish retail space which incorporated some of the most modern and innovative ideas of the day. Inside, the building was much larger than most other traditional chemists, and skylights were placed all along the roof to keep the salesfloor light and airy. The counters were inlaid with carved butternut which gave a bright ivory-like appearance, which was in stark contrast to the solid dark mahogany which was popular with other retailers at the time.

The store was one of the first in Nottingham to have electric lighting installed, which meant that customers could continue shopping in a well-lit space long into the dark winter evenings. In 1892, The Nottingham Daily Express reported: "what strikes one immediately upon entering is the great regard which has been paid to the character of the internal fittings…. Immediately you enter, and wherever you go, you are under a flood of natural light by day streaming through the roof; the illumination in the evening being by electricity, when the effect, of course, is superb." 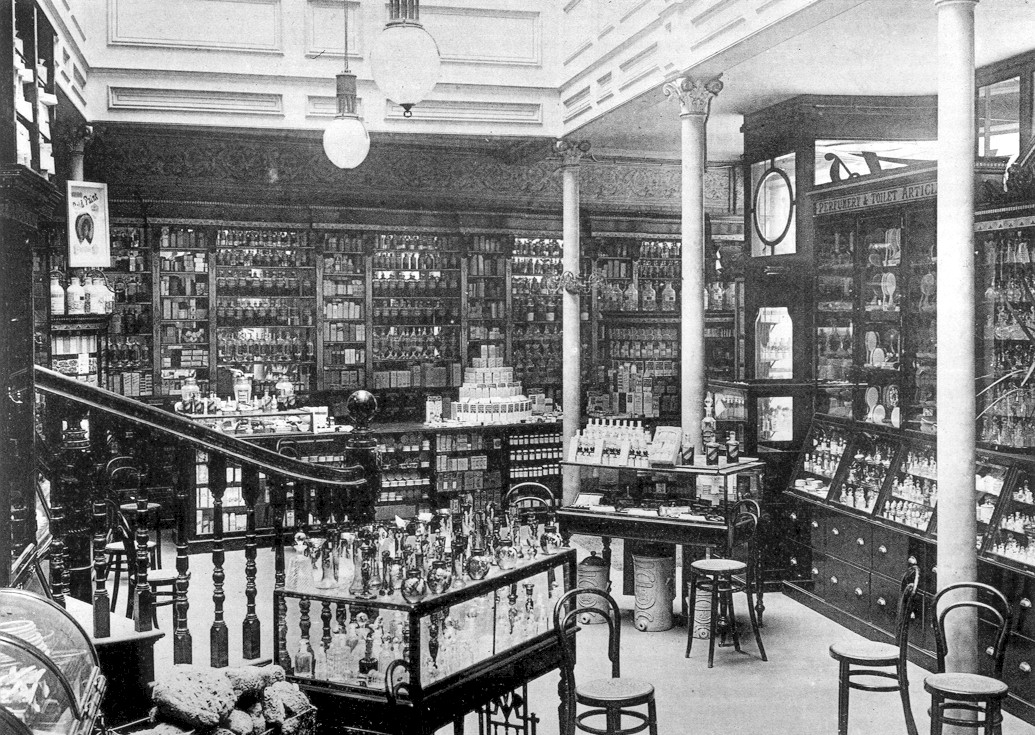 The large retail space allowed Jesse and his wife Florence to experiment with new lines and departments, with elaborate and extensive displays of goods for customers to spend time browsing before buying. The introduction of items not traditionally associated with chemists such as stationery, pictures, glassware and travelling requisites made the shopping experience far more like that of a department store, and products were often strategically located so that customers waiting for medicines to be dispensed might be tempted to purchase a gift or present from an attractive display.

With a customer base that had a growing amount of disposable income and saw shopping increasingly as a social activity, it was important for Jesse and Florence to include inviting spaces for people to meet. A good example of this at Pelham Street was the introduction of a ‘Boots Booklovers Library’, a service introduced by Florence whereby customers could pay a subscription and borrow books from Boots

The library inside Pelham Street was beautifully designed, with elegant furnishings and carefully selected reading material chosen by Florence. To encourage people from all classes to use the service, and true to Boots business principles, the subscription rates were set relatively low. At just 10/6 a year, which allowed the subscriber one volume at a time, this was half that was charged by other subscription libraries such as Mudie’s, WH Smith’s and Mitchell’s. 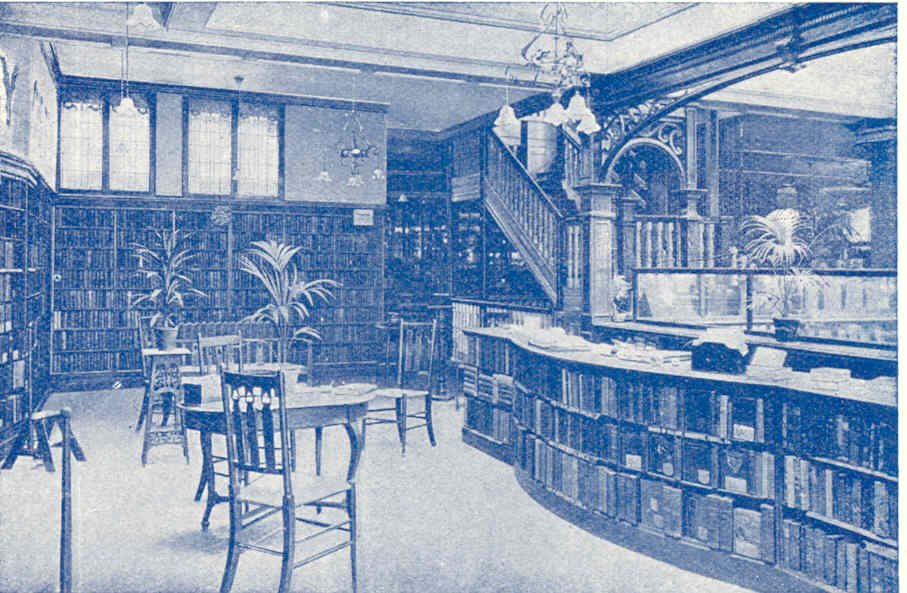 A similar clientele was drawn to Pelham Street by the opening of a tastefully-furnished café, again introduced by Florence. Pilot cafés had been opened previously in Burton and Brighton, and following their success Jesse agreed to open a much larger offering at Pelham Street, claiming that “Ours is the first departmental establishment to introduce to Nottingham this innovation so popular in London and New York’. The décor, china, tablecloths, lighting, menu and all other details were all meticulously chosen by Florence, and just like the Booklovers Library the cafe offered an exclusive service but were considered to be good value for money.

Other amenities available in Pelham Street, such as toilets and restrooms not only made shopping more comfortable, but also combined to make the store a safe and inviting place for women to meet. The store even had a smoke room for gentlemen, which offered coffee and cigarettes whilst they waited for ladies to shop. 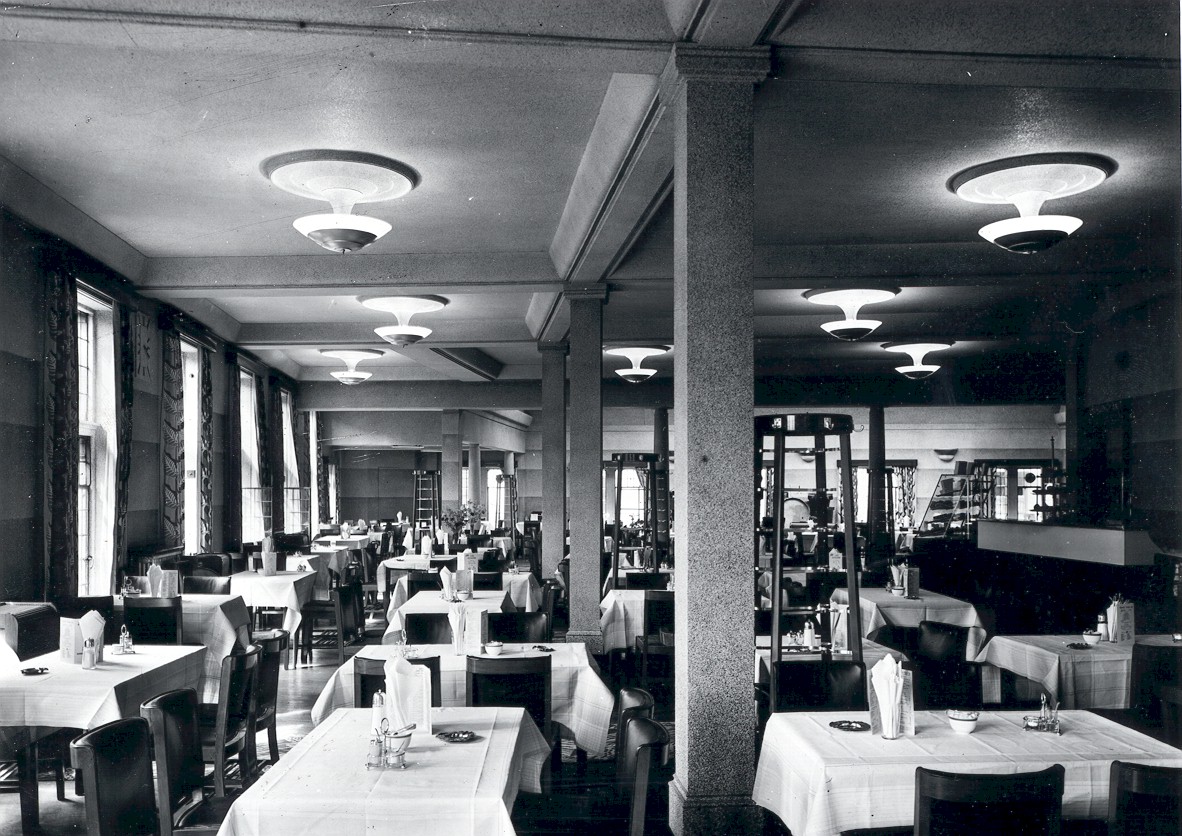 In 1903 the Nottingham Corporation embarked on a programme of street-widening which included the Pelham Street site, and Jesse was again compelled to rebuild and extend the store. The imposing new Art Nouveau-style building, which remains today, occupied almost all of the High Street and provided a enormous shopping frontage where impressive window displays were used to attract passing trade.

The architecture of the new store was particularly significant in that it was developed by Nottingham architect Albert Nelson Bromley who went on to design many of Boots other stores. Pelham Street was the first of an ‘in-house’ style which Bromley replicated in lots of other Boots stores across the country, including in Birmingham, Lytham St Anne’s, and Southend. 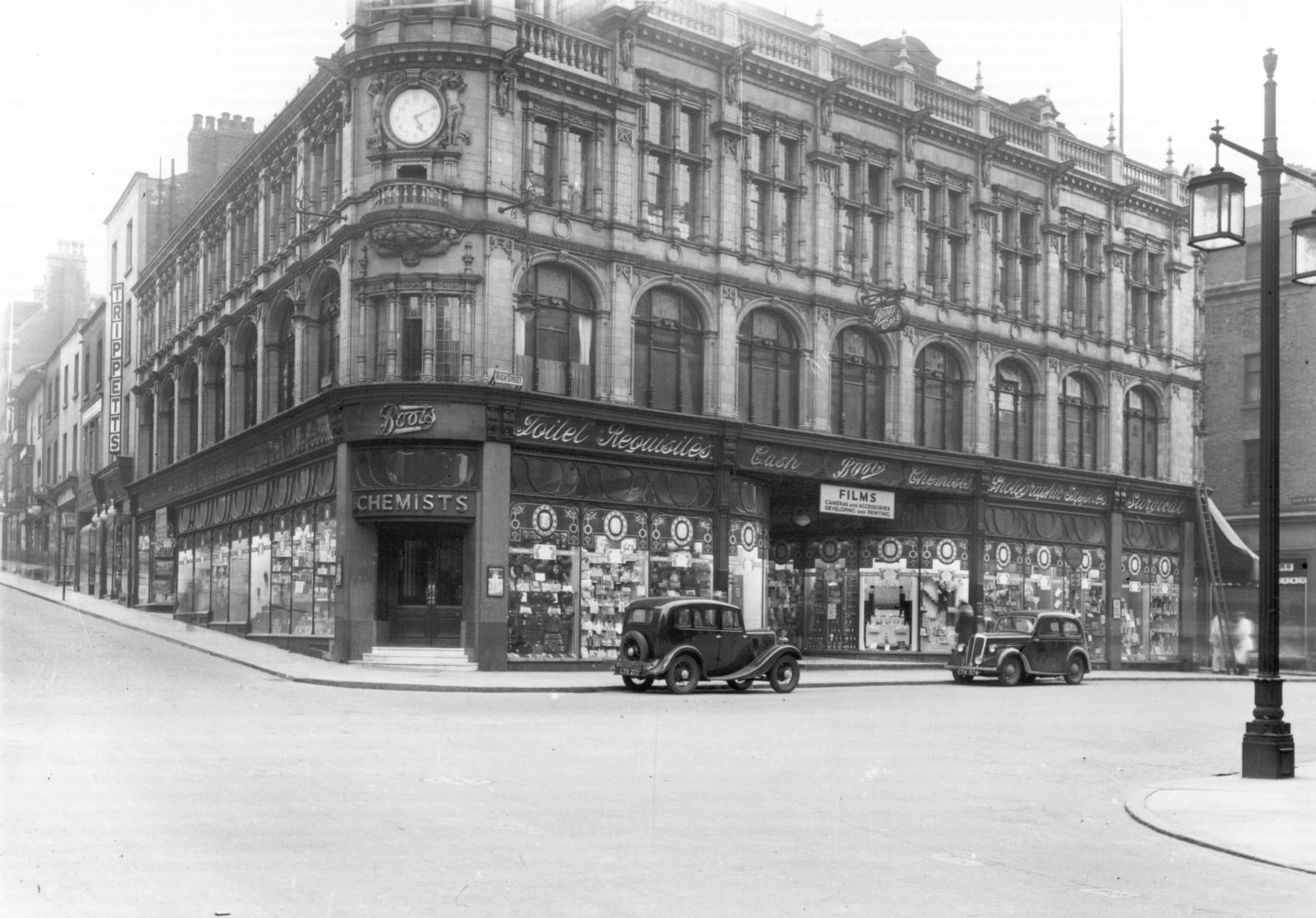 Boots eventually ceased trading at Pelham Street on the 11th May 1972, when the store relocated into the newly completed Victoria Shopping Centre. Today the building is grade II* listed in recognition of both the art-nouveau style shop front, and the fact that it is one of the first flagship stores for a major nationwide business which was designed in an ‘in-house’ style. 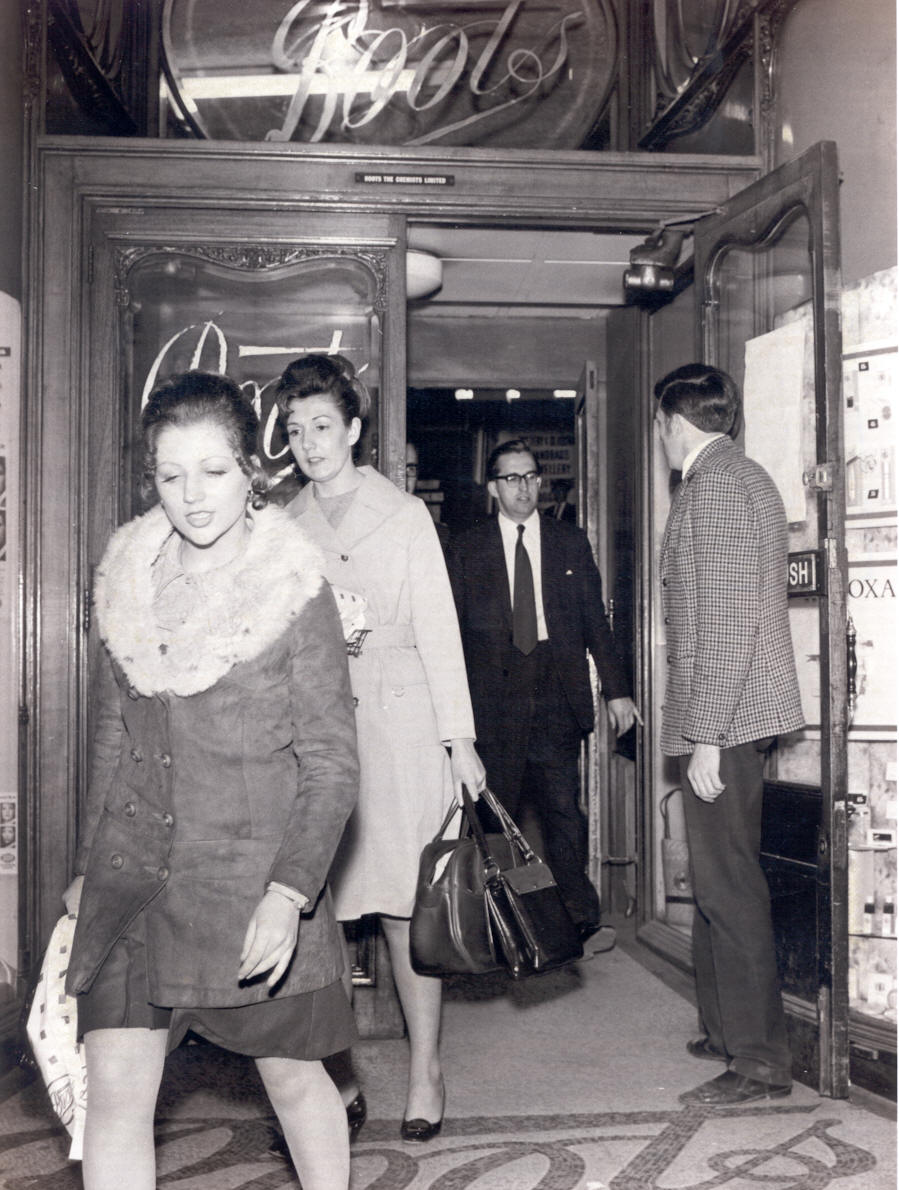