You are here: Home Newsroom Features Iconic innovations: the history of Boots retail through 12 significant stores

To celebrate the amazing contribution our team members make to their local communities, throughout 2022 the archive team will be telling the story of Boots retail through 12 significant stores as part of our ‘Iconic Innovations’ series.

Each month we’ll be taking a closer look at the Boots stores which have been pioneering in creating new retail offerings and environments, starting this month with our iconic Goose Gate store, where it all began for the Boot family.

John Boot opened his first store at 6 Goose Gate, Nottingham in 1849. The British and American Botanic Establishment, as it was known, sold herbal remedies to Nottingham's industrial poor at a time when traditional drugs were beyond the reach of many. Available for consultations on Mondays, Wednesdays and Saturdays, John spent the other days of the week collecting the wild herbs he required from the fields and hedgerows around the town.

Unfortunately, no known photographs exist of the first store, however this image was created a few years later as a reconstruction and gives some idea of what it may have looked like.

John Boot died in 1860 and his widow Mary continued to run the store with the help of her 10-year-old son, Jesse. As he grew older and the business began to prosper, Jesse was made a partner, then eventually took sole control in 1877. He soon realised that to grow the business he required more space, and later that year leased a larger property further along Goose Gate where he could begin to introduce his own initiatives and ideas.

Following the purchase of his new Goose Gate premises, Jesse quickly bought more surrounding properties to expand into and employed a local architect, Richard Charles Sutton, to redesign the building. Jesse sought to challenge the existing pharmacy business model by creating a luxurious and elegant store in a traditionally working-class area that welcomed customers from all backgrounds and classes. 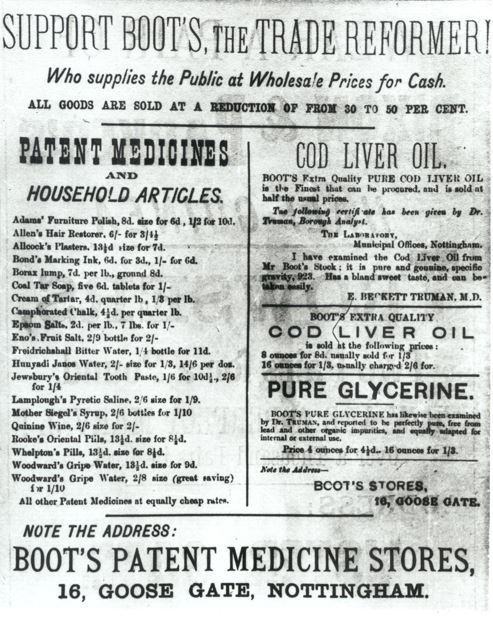 The store exterior was completely re-designed to create an imposing retail space. The frontage of the first two floors were made entirely of glass with twisted gold coloured iron columns, which flooded the store with natural light and allowed an enormous range of products to be displayed in the windows. This was a very early example of the effective use of window displays in retail and marked a clear departure from the accepted style of the day. Importantly, all the products on show were clearly marked with prices which enabled customers to know if they could afford an item before they entered the store.

Jesse used the huge glass windows to his full advantage, applying a theatrical style to create displays that caught the eye and imagination of the people of Nottingham. It was not unusual for him to fill every available space in the windows with the latest cut-price lines such as seltzogenes, hops and sponges, which made it impossible for any customers passing by to ignore. On some occasions, he even created ‘interactive’ displays, where men would be working in the window space cutting, wrapping, and weighing bars of soap. 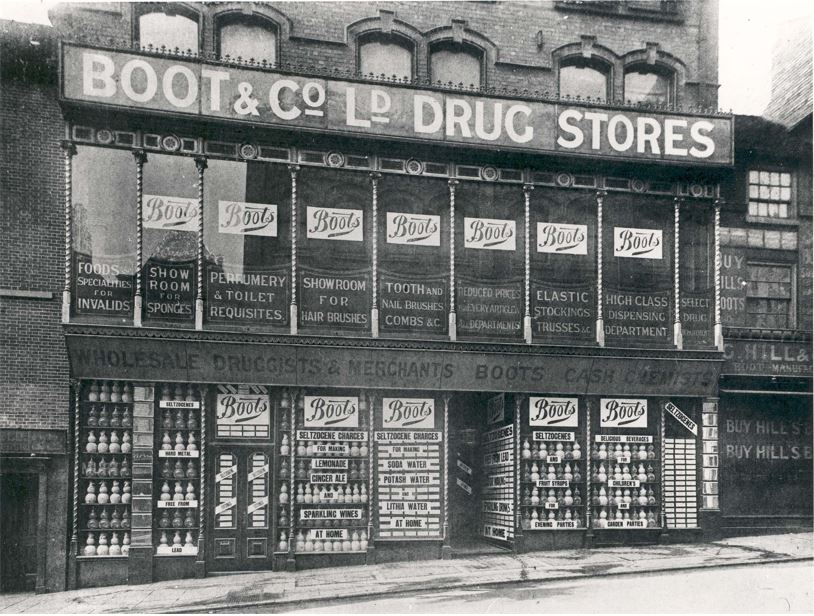 The redevelopment continued inside the store, where Jesse sought to create a new retail space that felt far more like the department-style stores that we recognise today. He spread the business over several floors which was unusual at the time and helped to create a sense of intrigue and excitement amongst Nottingham shoppers.

To allow customers to travel between the different levels a staircase was installed in the middle of the shop floor alongside an ornate hydraulic passenger lift, which was the first of its kind in Nottingham. Having not seen or used a lift before customers were initially reluctant to use it, and had to be encouraged by Boots employees that it was safe to use!

One of the most significant parts of the developments was the introduction of a dispensary, and in 1884 Jesse employed his first qualified pharmacist, Edwin Waring. Buying into the disruptive way in which the business operated, Waring almost immediately took the bold decision to halve the cost of prescriptions at Boots whilst at the same time ensuring that all items were attractively packaged and dispensed in high-class surroundings. This meant that products looked no less impressive than those available at ‘established’ chemists throughout Nottingham, but they were far more affordable – allowing the dispensing department to quickly grow under Waring’s management.

To sit alongside the dispensary and traditional healthcare departments, Jesse also introduced new offerings including an ‘Art Department’ and a ‘Ladies’ Department’. These catered for customers with a greater disposable income and who could afford to buy more expensive items, which marked the move into business largely unconnected with the drug or patent medicine trade. The departments were designed to be high class and luxurious, and they included an attractive waiting area and a lavatory, which was one of the first ever women’s toilets in a store environment.

Jesse understood the importance of store design in attracting customers and bolstering the company’s name. He wanted his stores to be impressive and desirable retail spaces in order to counteract some of the criticism he received due to the competition he gave to established chemists and druggists.

As the popularity of the business continued to grow, Goose Gate acted as a model for other new Boots stores. In 1884, Jesse opened new branches in Sheffield and Lincoln, and less than 50 years later Boots had opened over 1000 stores across country.

Boots remained in the Goose Gate store until 1967, and the building is still visible in Nottingham today, with a blue plaque outside in recognition of Jesse Boot and the birth of the organisation. 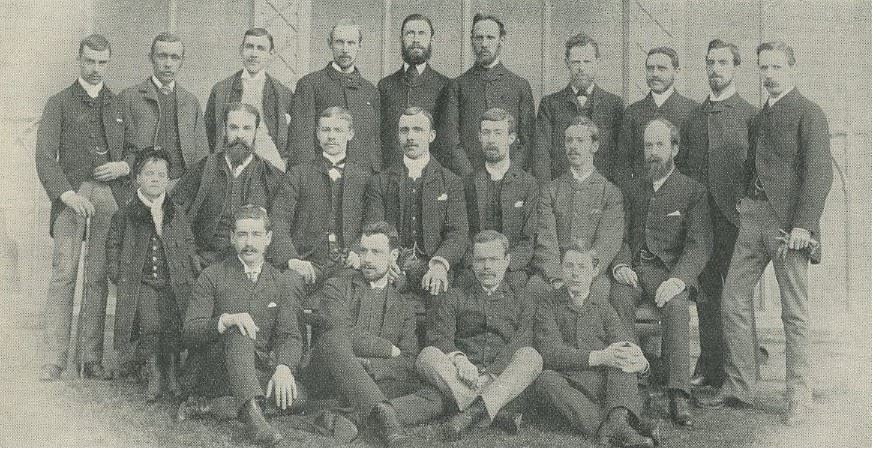