In this ‘Iconic Innovation’ we’re celebrating Boots first out-of-town store, which opened in the Brent Cross Shopping Centre. Conceived as a totally new shopping format designed to bring shoppers out of the West End and away from the hustle and bustle of city life, Brent Cross offered a modern, hassle-free shopping environment with everything a customer needed all in one location. 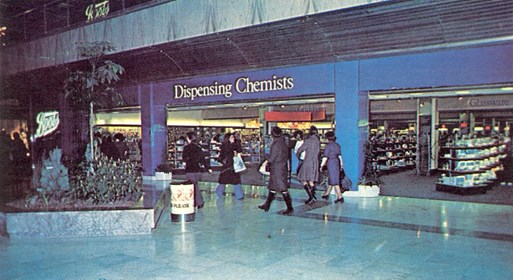 Opening in 1976 shortly after the UK had come out of recession, the Brent Cross Shopping Centre was seen at the time as a bold and progressive development bringing the American ‘out-of-town’ shopping centre concept to Britain. Externally, the building was brutalist in its design, with huge concrete walls and sharp edges, yet inside it was remarkably different, providing a relaxing shopping experience with comforts including vast swathes of marble flooring, air conditioning and huge indoor fountains softened by green planting.

When it first opened the centre was home to 75 stores including Fenwick, John Lewis and Marks and Spencer, and customers were attracted by the idea of ‘destination shopping’ with access to a huge range of different products and services, no matter the weather or time.

The centre opened for longer than most other high street stores and town centre shopping complexes – from 10am to 8pm on weekdays and 9am to 6pm on Saturdays, which was in stark contrast the traditional 5pm weekday and half-day Wednesday closing. The centre drew its custom from a huge North London catchment area and was also popular with shoppers travelling on the M1 motorway, who could park for free in the large car parks at Brent Cross. 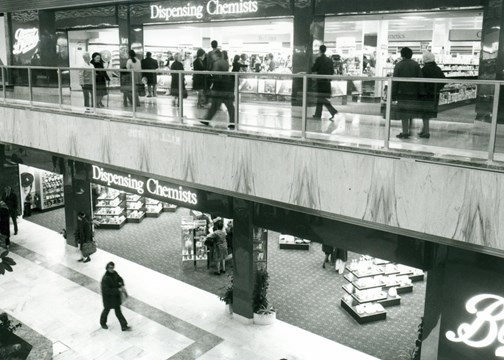 Boots began trading at Brent Cross on the 2 March 1976, the same day the centre opened. It was the only chemists in the centre, and was also the first store that Boots had opened in the immediate area, demonstrating a confidence that despite a difficult economic period there was faith in both the design of the store and the concept of out-of-town shopping.

On the opening day Boots Territorial General Manager Gordon Hourston claimed that “This branch is something very special... staff and customers will appreciate the differences in concept and design”, and from the outset it was designed to be markedly different to other Boots stores. To fit in with the ‘luxurious’ appearance of the centre, Boots introduced a range of new features to provide customers with the best possible shopping experience. The store was spread over two floors and huge glass frontages on both levels let light enter and allowed customers to see directly across the whole of the shop floor and view all the products on display. This allowed the use of a much softer lighting in-store, and wall-to-wall carpeting throughout created a far gentler and relaxing shopping experience.

The out-of-town location of the Brent Cross Shopping Centre was particularly popular with women and families, who were attracted by the notion of both a safer and relaxing shopping experience. As a result of this beauty and fashion lines were particularly successful, and Boots recognised this by implementing a brand-new design to the cosmetics area. Specially designed islands and tungsten illumination over-head gave the impression of a sparkle over the beauty shopping area, quickly helping to drive sales and leading the Brent Cross No7 team to become the top-sellers across the whole of the Boots business after just a few years.

Uniquely, the store also had the best-selling Tie Rack concession, and sold the most sandwiches from its Foodcentre. This was attributed to the fact that there were surprisingly few other food options available in the centre, leaving Boots to fill the gap! 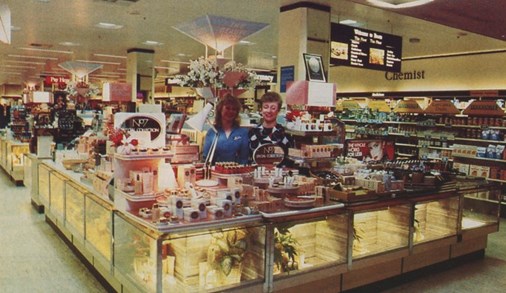 Whilst the new format was successful, an early challenge was that due to the out-of-town location and the fact that there were many retailers all opening at the same time it was difficult to find qualified and experienced employees to work in store. Fortunately Boots overcame this problem, and by the mid-1980s there were around 215 people working at the store. Interestingly, between them the staff spoke 14 languages ranging from Punjabi to Swedish, Greek to Hebrew, and Italian to Gaelic, catering to a diverse customer base. 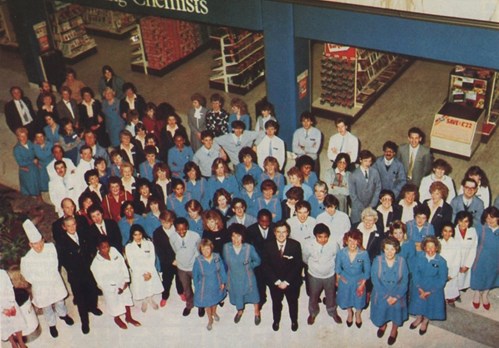 Today, the Brent Cross store remains open after serving its local and wider communities for over 45 years, and Boots now have stores in a range of out-of-town shopping centres across the whole of the United Kingdom.