Queen Elizabeth II presided over vast changes for the country, society and business. Her Royal Highness impacted Boots and our team members at many poignant points in her life and reign, from Boots' very first Royal Warrant awarded by Her Majesty to celebrations for her 90th birthday and beyond. We wanted to commemorate The Queen's ever-present influence by highlighting some memorable moments from the Boots Archive. 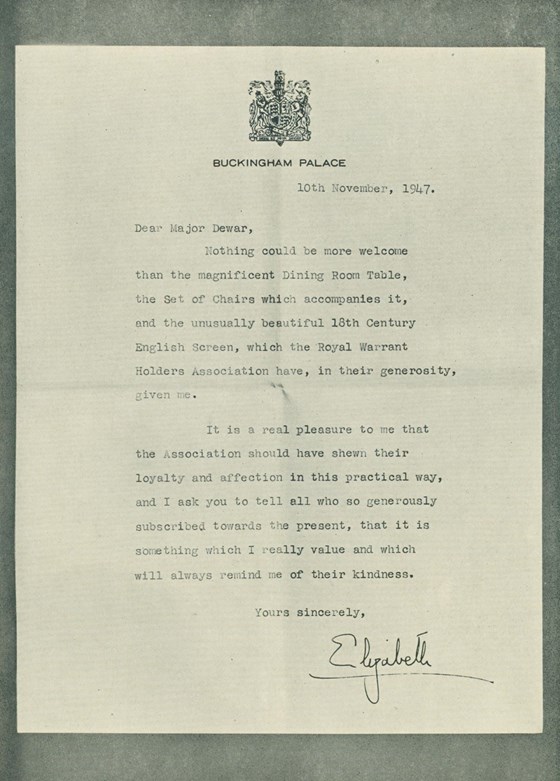 Members of the Royal Warrant Holders Association, which included Boots Pure Drug Co. Ltd, presented gifts to Princess Elizabeth and The Duke of Edinburgh to celebrate their marriage.

The gifts were a mahogany Chippendale dining table, twenty chairs and a sidetable, and an early eighteenth-century English leather screen. 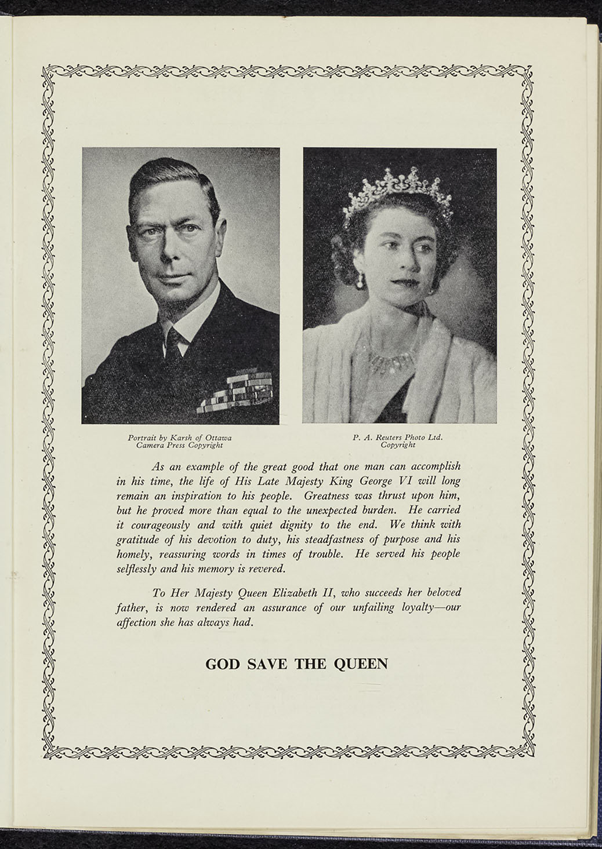 Boots employee magazine, The Bee, began its April 1952 issue with an article of remembrance for George VI.  The final line read:

“To her Majesty Queen Elizabeth II, who succeeds her beloved father, is now rendered an assurance of our unfailing loyalty – our affection she has always had.” 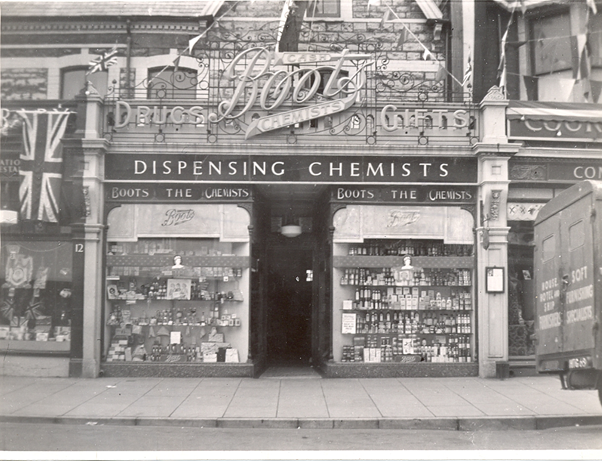 Boots stores across the country created window displays to celebrate the Queen’s coronation. 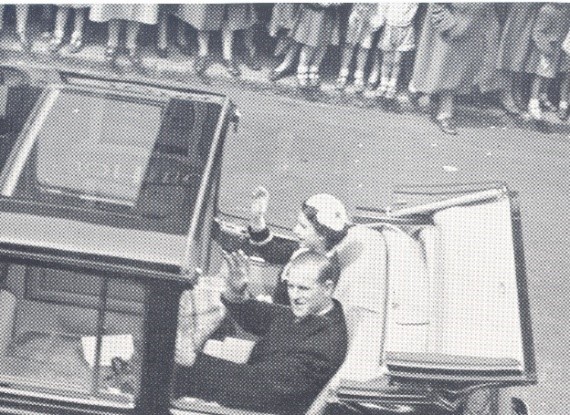 This image of Her Majesty the Queen and His Royal Highness the Duke of Edinburgh was taken by Mr. L. L. G. Bunting, qualified relief pharmacist in Territory 27, on the occasion of the West London State Drive on 24 June.

It was taken from the first floor of Store 752, Hammersmith, and published in The Bee, Boots employee magazine. 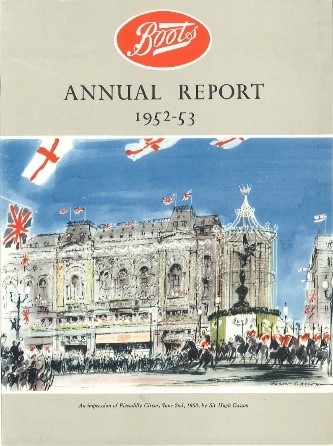 Along with creating a dedicated range of coronation souvenirs, Boots also rebranded some of its most popular gift sets in coronation packaging. Stores in London were decorated and staff from all over the country arranged visits to see them.

The image shows the front cover of the 1952-1953 Boots Annual Report. The painting depicts the Boots store at Piccadilly Circus decorated for coronation day. 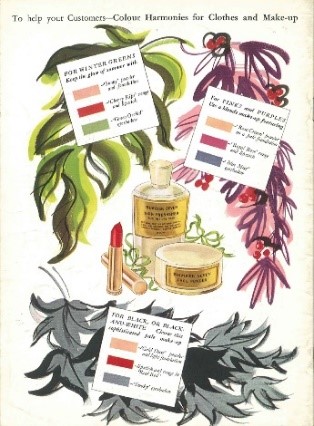 To celebrate the Coronation Year, Boots introduced a new lipstick known as Royal Rose.  The colour was described as ‘very exciting; being equally perfect for day or for evening’

The image shows ‘Colour Harmonies for Clothes and Make-up’ taken from No7 Magazine, Autumn 1953 – featuring an example of Royal Rose Shade. 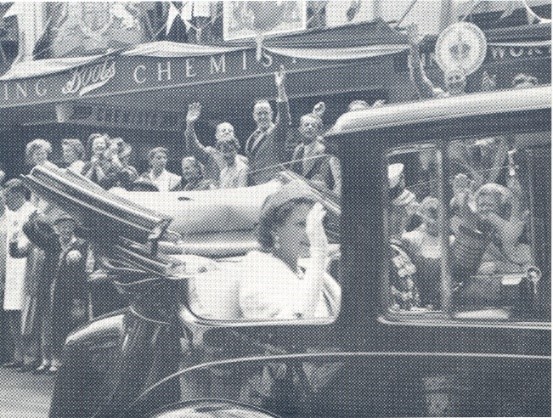 Her Majesty Queen Elizabeth II and His Royal Highness the Duke of Edinburgh greeted by crowds outside the Boots branch at Wellington, New Zealand.

Boots received its first Royal Warrant from Queen Elizabeth II on 15 July 1955, as ‘suppliers of soap’. The first warrants to be issued by Her Majesty were in the Summer of 1955, which made Boots award one of the first to be granted under her reign. The award was extended in 1958 to include provisions of Agricultural and Horticultural goods. 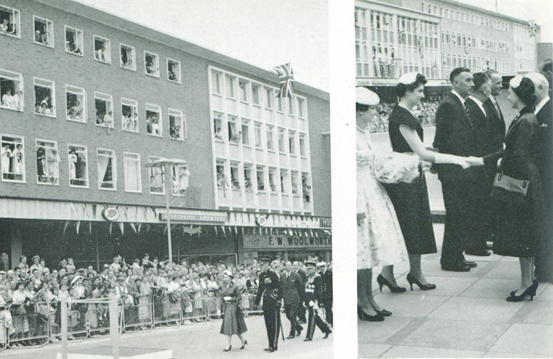 On 9 June 1958, Queen Elizabeth II visited, the then new town of Crawley. Miss D. Jackson, from store 1461, was one of three retail assistants from the town to present gifts to the Queen. Boots presented a cased brush and comb set for Prince Charles. 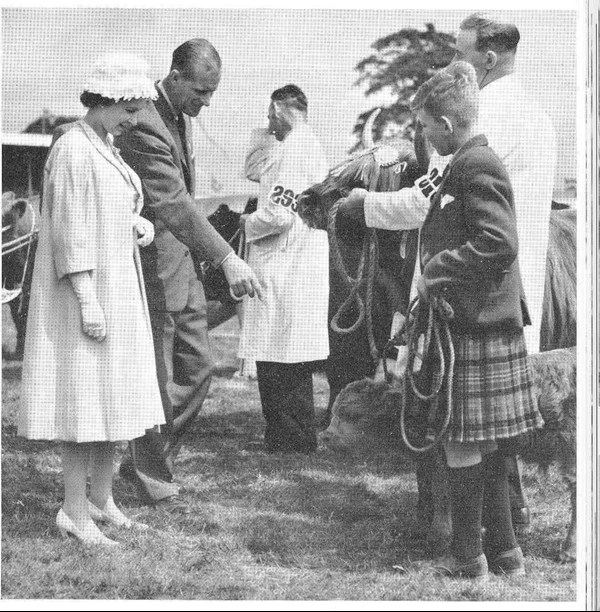 This image shows the Queen and the Duke of Edinburgh admiring Boots Champion Highland entry, Morag-Rudh of Mingary, and her calf at the Royal Highland Show. Proud Exhibitor is Mr. A. McCullum, Farm Manager at Mingary. 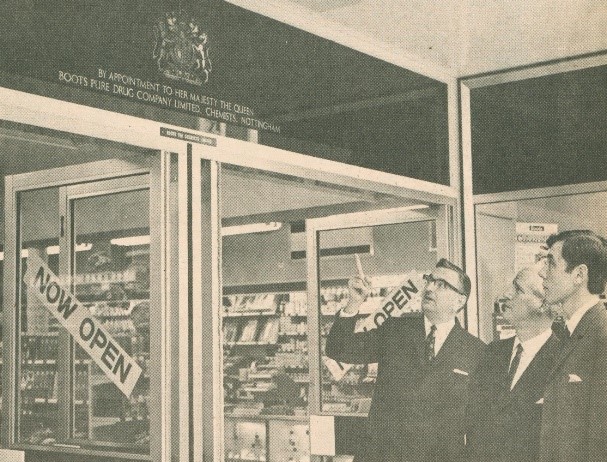 The Queen’s Royal Warrant was put on display at the new Boots store at Windsor.

“For it is this branch that most of Her Majesty’s requirements of Boots goods are obtained by the Queen’s Housekeeper and the Steward of Windsor Castle. While Her Majesty’s purchases range over much of our inventory the emphasis is laid upon chemist lines and horticultural and agricultural goods for which, of course, we hold the Royal Warrant and we are particularly proud of the fact that supplies for the Royal gardens are delivered to the manager of Windsor Great Park”. 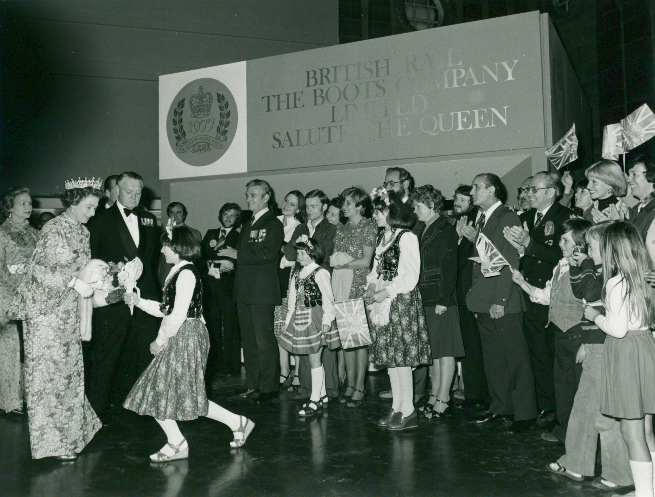 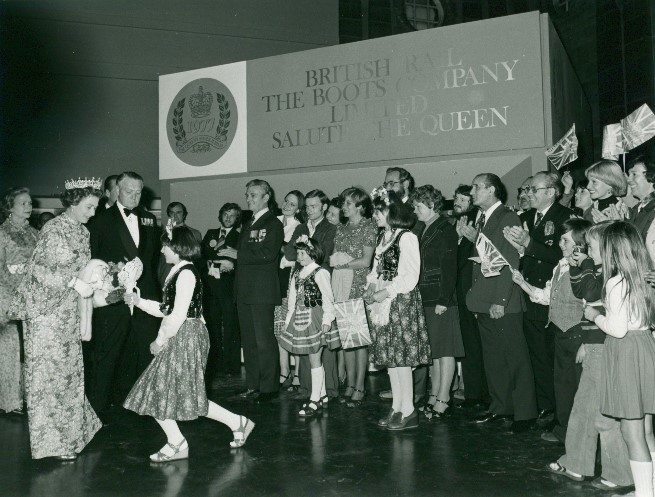 Boots contributed £55,256 to the Queen’s Silver Jubilee Fund, which was created to commemorate her 25 years on the throne and to ameliorate the lives of young people.

The image shows the Queen at the British Rail and Boots stand at the Silver Jubilee Exhibition of Achievement. 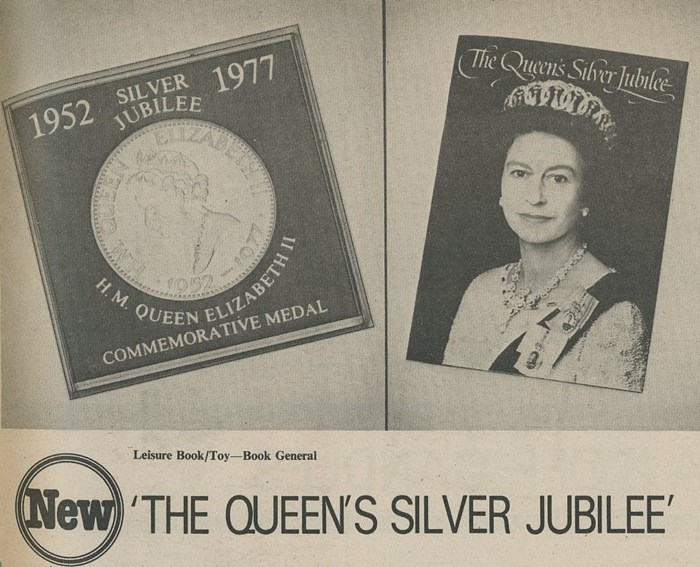 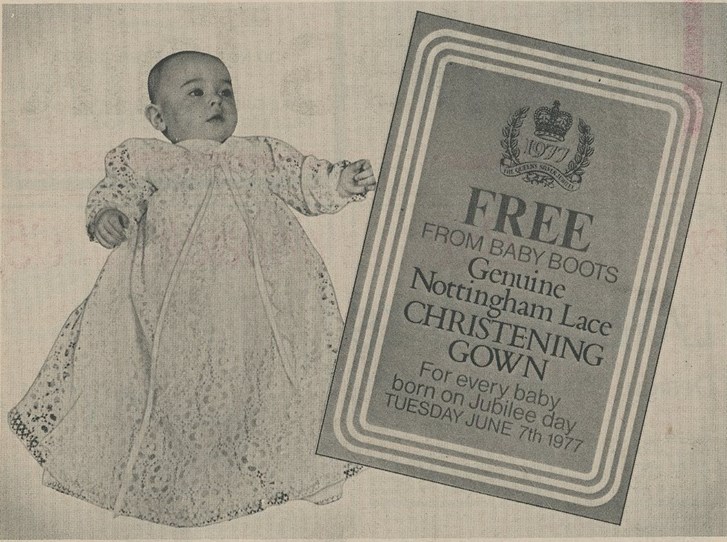 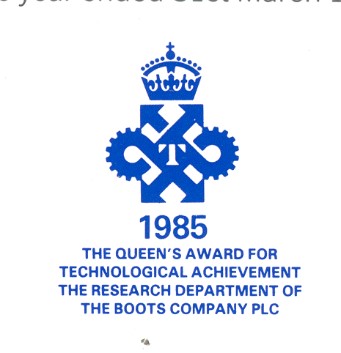 The Boots Company Research Department received the Queen's Award for Technological Achievement for the discovery and development of ibuprofen - the first time it had been awarded for a painkiller. 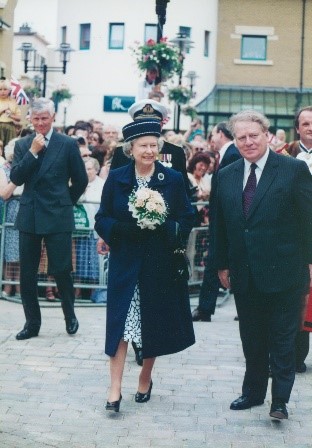 She is pictured here alongside Sir Michael Angus, Chairman of The Boots Company. 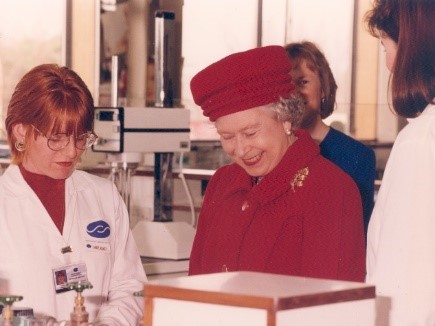 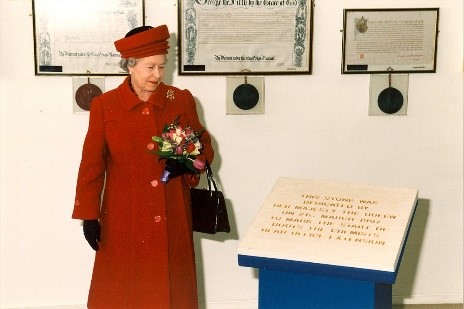 On March the 21st 1997, Nottingham celebrated its centenary. The Queen travelled to the city and in the afternoon visited Boots head office.  She met and spoke with the board of directors and members of the executive, before touring Boots Contract Manufacturing’s development laboratories where she showed a great interest in their work. 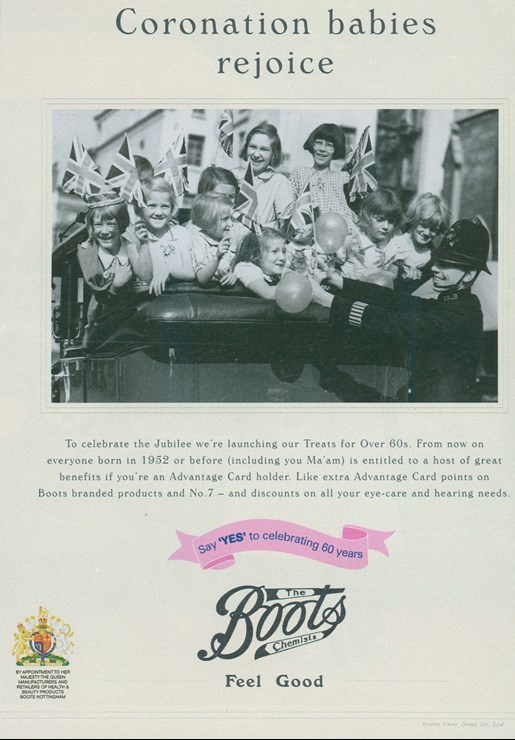 Advertisement regarding the Queen's diamond jubilee with a Treats for Over 60s campaign. It included the Royal Warrant which was awarded to Boots for its Health and Beauty Products.

Boots was one of the hosts at the Patron’s Lunch, in celebration of the Queen’s 90th birthday.  The event, which aimed to recognise Queen Elizabeth II’s support for over 600 charities, took the form of a street party for 10,000 guests, who were mainly from ‘Patron organisations.’

The company was represented at the event by Stefano Pessina, Ornella Barra and Simon Roberts, as well as over 40 Boots regional store managers, who received invites in recognition of their tireless contributions to their local communities.

WBA was also able to invite a number of VIP guests, including guest of honor Albert II, Prince of Monaco.