This weekend, over 100 Boots UK colleagues took part in a tough overnight endurance climb to the summit of Ben Nevis to fundraise for Macmillan Cancer Support.

On Saturday night, a team of 111 Boots colleagues, including groups and individuals from Boots stores across the UK and the Boots UK Support Office in Nottingham, took part in an overnight moonlit hike to the summit of Ben Nevis.

Kitted out with walking boots and head torches, the Boots team together scrambled rocks and trekked over high cliffs in the dark, taking the steep ascent to 1,345 metres above sea level. Challenging their endurance limits to raise important funds for Macmillan Cancer Support, colleagues have been getting ready by holding auctions, samosa and sweet sales and static bike challenges, among other activities. Together, they have already raised over £25,000 in funds for Macmillan Cancer Support - with more still coming in.

The hikers took between six and nine hours to complete the challenge, Una Kent, Director of Communications at Boots UK, who was a member of the expedition and one of many colleagues who has done several endurance challenges on behalf of Macmillan Cancer Support, comments: “It’s been incredible to take part in another challenge for Macmillan. This is a fantastic partnership that many Boots colleagues feel passionately about. Everyone involved has done so much to get themselves to the ‘top of the hill’ to honour people who are on one of the toughest journeys of their lives. We are committed to making sure that no one faces cancer alone.” 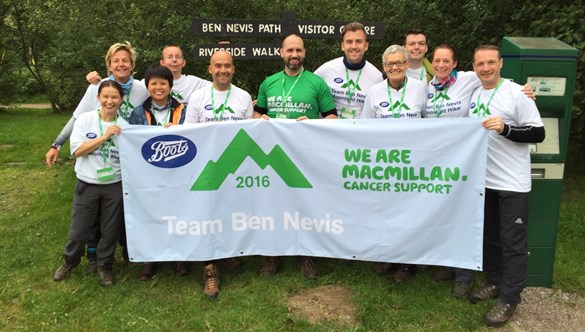