You are here: Home Newsroom Features Prescribing Kindness: We are all cut from the same cloth

Prescribing Kindness: We are all cut from the same cloth

A Boots Opticians colleague with an eye for costume design has been creating scrubs for healthcare workers on the frontline of the COVID-19 pandemic.

Elise Johnson, an Assistant Manager at Boots Opticians, was about to begin her journey to become a Dispensing Optician. But with the Coronavirus delaying her start date, she found herself with both extra time and extra fabric on her hands.

Having previously studied costume design before pursuing her optometry career, Elise has always kept her skills – and needles – sharp, by creating handmade clothing during her spare time.

“I've done bridal garments; I've done costumes for theatre companies, and a lot of comic conventions as well,” explains Johnson. “If it exists on paper, I've probably made it at some point.”

Deciding to put her sewing skills to good use, Elise turned her hand to making hospital scrubs for her friends and family on the frontline of community healthcare. While it might be her first time making scrubs, it’s not an unfamiliar process.

“I've actually made quite a number of karate uniforms and they look very similar when you’re making them,” says Johnson. “Then, muscle memory takes over and you’re done.”

Using her current stockpile of fabric, Elise has so far made more than 20 full sets of scrubs, consisting of tops and trousers. By using the material she already owns, her personality is sure to shine through in many of pieces she’s donating.

“I’ve been able to bust out the really fun stuff,” she says, laughing. “So there will be nurses wearing Pokémon fabric in Harrogate District Hospital by the time the week’s up.”

With her supply of material beginning to run low, Elise is now reaching out for support via a GoFundMe page. She is hoping to raise enough money to buy more material, so she can continue giving her handmade scrubs to those who give everything to their local communities.

“I'm not delivering medication and I'm not testing people for COVID-19, but this is something I can do to make a difference,” says Johnson. “At least I'll be making a difference to a few people's wardrobes for a number of months.” 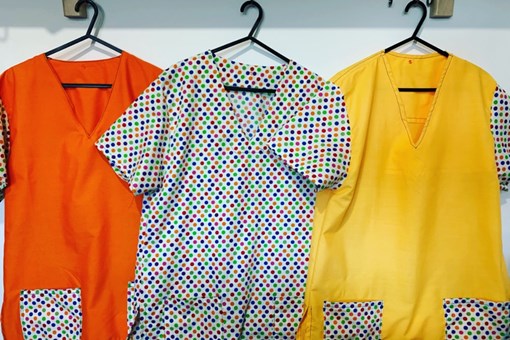 Boots UK is the largest pharmacy-led health and beauty chain in the UK and its purpose is to champion everyone’s right to feel good. With 2,336* stores and a team of around 52,000* colleagues, of which approximately 6,600* are registered pharmacists, the Boots brand has been at the heart of local communities across the UK since 1849. Boots UK is committed to providing exceptional customer and patient care and being the first choice for pharmacy, beauty, healthcare and wellness, alongside offering its innovative portfolio of product brands, including No7, the UK’s No1 skincare brand, Soap & Glory, Liz Earle, Sleek MakeUP and YourGoodSkin.