Today is World Pharmacy Day and we wanted to take this moment to recognise the great things our pharmacy colleagues do.

Pharmacy has been at the heart of Boots since the appointment of our first pharmacist, Edwin Waring, in 1884. Today, we employ thousands of pharmacy colleagues in our 2,500 stores in cities and rural communities across country, meaning that customers are never far from care and support. The relationships we build with our patients can be vital for those who have both short and long term healthcare needs.

The difference we make every day is evident – from the safe supply of complex medication with advice our patients trust, to potentially lifesaving injections, and giving advice and care from a convenient community location. So, this is indeed a great moment for us to celebrate together and thank our pharmacy colleagues.

Here are some stories of the care we provide, celebrating the diverse roles that pharmacists play in their communities: 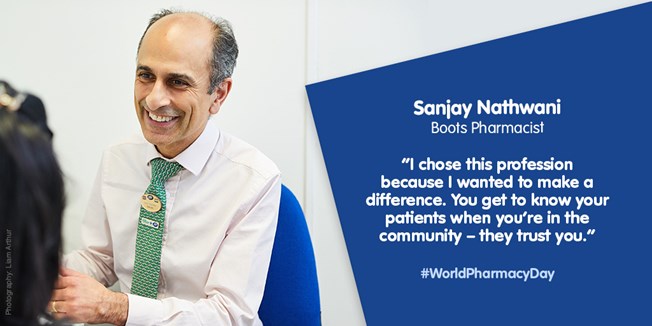 As a Boots Macmillan Information Pharmacist, Sanjay offers support and information to help people affected by cancer look after themselves. This could be by supporting someone who’s been diagnosed, helping someone recognise the symptoms of cancer or by guiding people to local support.

Sanjay and his team have good connections with the local community, including the Macmillan after cancer exercise scheme run by the Tottenham Hotspur Foundation.  The scheme gives people affected by cancer the support and motivation to be active and. Through focusing on gentle exercises, to help a steady progression. Through this connection, the team at Boots in Southgate are able to direct patients to this initiative to help reduce the impact of cancer treatment side effects and help improve their wellbeing.

Sam Grieve, a pharmacist in Dover, completed an MUR for a patient a couple of weeks ago and during the conversation, the patient told her that he was visiting the toilet a lot at night. Sam suspected that there may be an underlying cause and, having checked the patient’s medication and history, recommended that he saw his GP immediately. 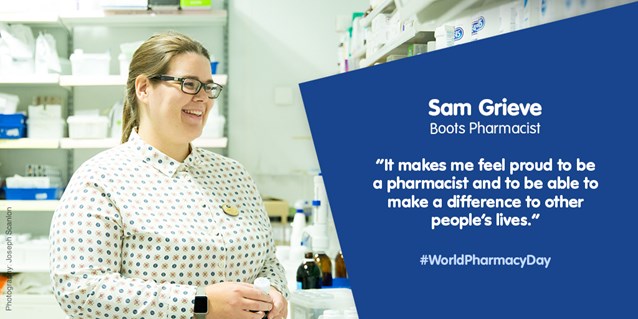 He was reluctant and nervous about doing this and asked Sam to intervene on his behalf. Sam did and managed to arrange for the patient to be seen by the doctor for further investigation.

The patient came back to the store later on to thank Sam as he was diagnosed with prostate cancer. He would never have known this without Sam performing a life-changing MUR and following through with the doctor in the way that she did.

“A customer who was visibly upset and stressed came into the Health Centre on Monday carrying her 3 year old boy. One of our pharmacy colleagues, Ashleigh right away noticed something wasn't right:  the boy had very swollen eyes and could hardly open them. Ashleigh made the pharmacist aware straight away and brought the customer and her son into the back, away from the rest of the customers.

Ashleigh herself has a son with severe allergies, so right away knew what was wrong with the boy. After confirming with the pharmacist, Ashleigh got the customer to give her son a dose of Chlorphenamine. Through this whole process Ashleigh remained calm and reassuring. The customer remained in the store for 10 minutes and once her son seemed calmer, Ashleigh sent them to A&E to get checked.

The customer returned to the store on Tuesday to let the team know how her son was. Once he got to A&E the anti-histamine had started to work, so the hospital gave him a dose of steroids and he was discharged a couple of hours later. She even brought in a bouquet of flowers for Ashleigh to say thank you.”

A customer visited the Woolston, Southampton store and asked to speak to the pharmacist as she was having difficulty swallowing and was suffering from minor speech problems. Having previously been diagnosed with anxiety the customer had assumed this was a similar case however the Boots Pharmacist suggested she seek urgent advice from her GP or, failing that, visit an accident and emergency department as soon as possible.

Despite feeling that the pharmacist was overreacting a little, the patient spoke to her GP shortly after and was referred immediately to an ear nose and throat specialist in turn referred her to a neurology specialist, where she was admitted to hospital with Myasthenia Gravis; a rare long-term condition that causes certain muscles in the body to become weak particularly in the eye, face and neck.

After a three week stay and intensive treatment the patient has been released from hospital and has visited the store to thank the pharmacist, who is now assisting them with the ongoing management of their condition.

It is our pharmacy teams that enable pharmacy as a profession to have such a great impact on people’s health. The patient research we constantly do reminds us of the importance of great people in pharmacy and how our pharmacy teams stand out as the key reason why people choose Boots for their care.