You are here: Home Newsroom Features Boots UK welcomes The One Show’s Rickshaw Challenge to Nottingham

Boots UK welcomes The One Show’s Rickshaw Challenge to Nottingham

For the first time in its sixteen year partnership, Boots UK welcomed The One Show’s Rickshaw Challenge to its Nottingham Support Office as part of this year’s BBC Children in Need celebrations.

On Wednesday 13 November, hundreds of colleagues gathered outside to celebrate the arrival of the inspirational team of six young people and The One Show’s Matt Baker, as they continued their 8 day, 400 mile journey from Holyhead to the BBC Elstree Studios in time for the BBC Children in Need Appeal Show on Friday 15 November.

Una Kent, Director of Communications and CSR, Boots UK, said: “BBC Children in Need is a cause that is close to everybody’s hearts here at Boots and for the very first time in our sixteen year partnership, we are delighted to welcome The One Show’s Rickshaw Challenge to our home town of Nottingham. The children taking part in this challenge are utterly inspiring and hundreds and hundreds of our Support Office colleagues came out in force to celebrate their remarkable achievement. What a wonderful way to inspire and make a difference to children and young people across the UK.”

One member of the team, Emma, 18, is from Boots UK’s home town of Nottingham. Shortly after she was born, doctors realised she had a severe liver disease resulting in her undergoing two liver transplants.

As she grew up, Emma started swimming and in 2015 represented Team GB at the World Transplant Games, taking home several medals. However, in 2017, Emma had a seizure which left her unable to walk, see properly or concentrate for long periods.  Emma’s sight gradually returned and a year later, following a long process of rehabilitation and physiotherapy, Emma was able to walk again.

Matt Baker, presenter of The One Show who is on the road with the team, said of the challenge before they set off: “I can’t believe that in just a few weeks’ time we’ll be heading back on the road again for the ninth year of the Rickshaw Challenge!

“We have a truly inspirational team joining us on the road, and we’re looking forward to seeing all those friendly faces who will be cheering us on from the roadside, as we battle the elements and complete the 400 mile journey from Wales to Elstree.” 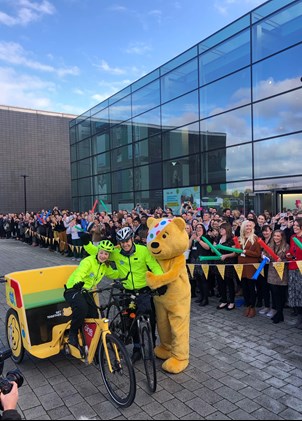 Emma, 18, from Nottingham, joined by Matt Baker, presenter of The One Show,
outside the Boots UK Support Office in Nottingham.