As Boots UK celebrates 170 years of helping the UK to feel good, celebrations are also in order for twelve of its longest serving colleagues who have recently achieved 50 or more years in service.

This week, 21 Boots colleagues attended a special event as part of its exclusive 50 Year Club celebrations.

Now in its third year, the exclusive club recognised the exceptional dedication and commitment of 10 new colleagues who have 50 or more years’ service, as well as 2 colleagues who have worked at Boots for 60 years - bringing the club’s total to 33 members from across the UK.

With careers that span over six decades, the 50 Year Club members have helped Boots transform into the business it is today. Not only have they seen Boots’ discovery of Ibuprofen, which is also celebrating its 50th anniversary this year, but they have also witnessed over 740 store openings and the launch of the Boots Advantage Card in 1997.

From Customer Advisors and Store Managers to multi-skilled Engineers, the careers of the 50 Year Club span many different roles. One member who attended this year’s celebrations was Ann Miller, a Pharmacy Technician at Boots’ Commercial Road store in Nottingham, who recently achieved 60 years in service.

Ann Miller, commented: “It feels wonderful to be one of only three colleagues who have achieved 60 years of service at Boots and I’m so proud to have reached this milestone here in Nottingham. I have so many fond memories of my customers and colleagues, and cannot believe how much has changed in 60 years - the once Edwardian-feeling dispensaries are unrecognisable to the stores we know and love today!”

As well as taking part in a tour of Boots’ Beeston site, each of the 50 Year Club members attended a special event at Lenton House, the historic Boot family home, on the grounds of the University of Nottingham. During the evening celebrations, members were joined by Seb James, Senior Vice President and Managing Director of Boots.

Seb James, said: “As I enter my tenth month at Boots, I am truly humbled by those of my colleagues who have been here for more than 50 years - and even more so by the two colleagues who are celebrating an astonishing 60 years with us. This - more than a third of Boots’ history - is an extraordinary achievement and represents a level of wisdom, commitment and experience which is nothing short of remarkable. My sincere and heartfelt thanks.” 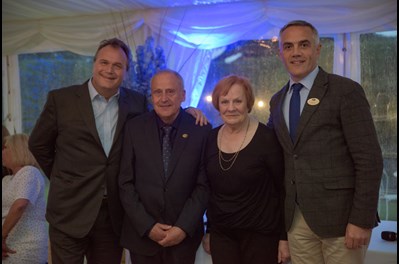