For the third installment of ‘Boots Hidden Heroes’ Boots is celebrating the life and career of Edwin Waring - Boots very first pharmacist. Affectionately known as the ‘Grand old man of Boots’, his career spanned almost 50 years, during which time he transformed the direction of the business and oversaw a period of growth in which Boots became established as the largest retail chemists business in the United Kingdom.

170 years ago when John Boot opened his first store, traditional drugs and medicines were beyond the reach of most people. He began by making and selling herbal remedies to the industrial poor of Nottingham, but as the business grew his son Jesse introduced patent (over the counter) medicines and sold them at greatly reduced prices. It wasn’t until 1884, when Jesse employed Edwin Waring as Boots first pharmacist that a dispensing service was introduced, and marked the beginning of Boots becoming ‘Chemists to the Nation’.

Edwin Scholey Waring was born in Havercroft, Yorkshire on 7th May 1858. He made his first venture into the field of pharmacy when he began an apprenticeship with a traditional chemist in West Vale, Yorkshire, before qualifying in April 1880.

After holding positions in a number of different pharmacies, Waring took up a role in a prestigious chemist store in the centre of Nottingham. Here he began to establish a reputation around Nottingham as a capable young man who was popular not only in his employment but also in local music circles and in the Church of England Society. 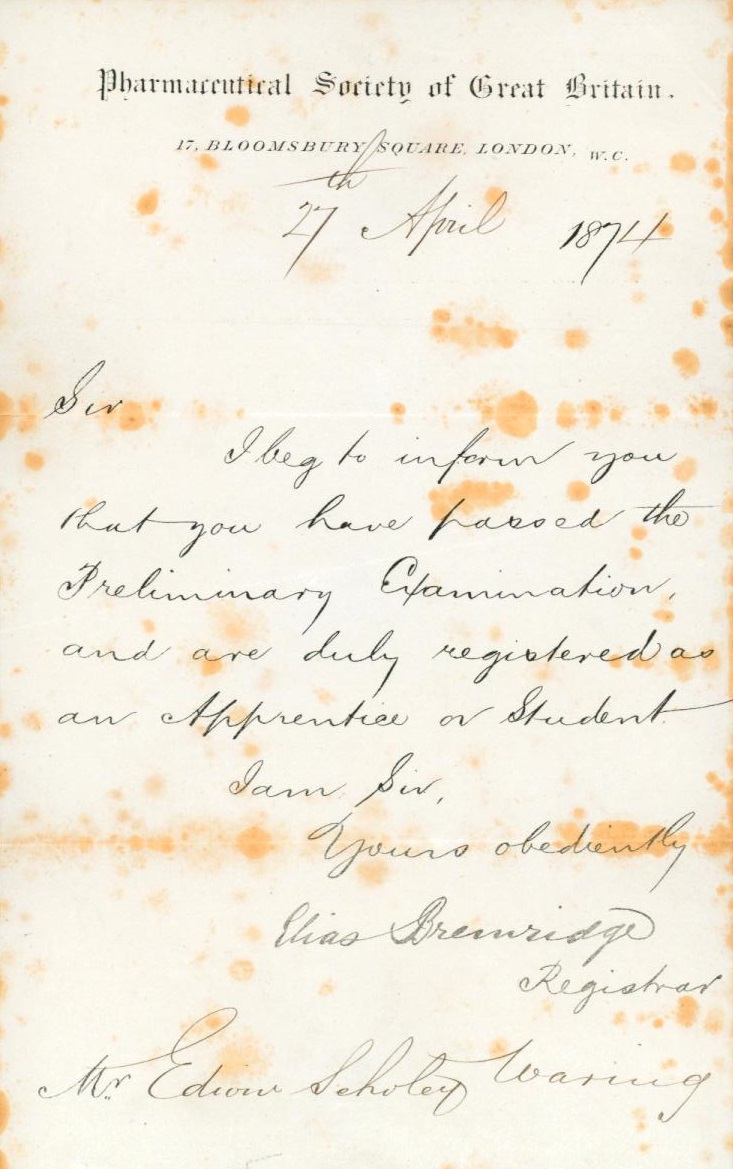 It was at this point during 1884 that Jesse Boot was also looking to employ his first pharmacist. A change in the law in 1880 had allowed limited companies for the first time to sell poisons and dispense prescription medicines, and Jesse was keen to take advantage of this and move into the dispensing business.

Jesse approached Waring, who was only 26 at the time and managed to persuade him to take a considerable risk to come and work at his Goose Gate store. Bob Elliott, one of Boots earliest employees claimed that “It needs little imagination to realise that it required considerable courage on Mr Waring’s part to join Mr Boot, and it is further evidence of the wonderful personality of Mr Boot to be able to persuade him to do so”.

Almost immediately after his appointment Waring took the bold decision to halve the cost of prescriptions at Boots, whilst at the same time ensuring that all items were attractively packaged. This meant that Boots products looked no less impressive than those available at ‘established’ chemists throughout Nottingham, but they were far more affordable – allowing the dispensing department to quickly grow in size under Waring’s management.

The success of the dispensary service at the Goose Gate store was so impressive that it quickly gave birth to the idea of duplication, with Bob Elliot claiming that “I have no hesitation in saying that, in my opinion, it was Mr Waring who made a success of Mr Boots first venture as a ‘Cash Chemist’”. Therefore, in 1884 Boots opened their first branches outside of Nottingham, in Sheffield and Lincoln, which were both equipped with fine dispensaries. 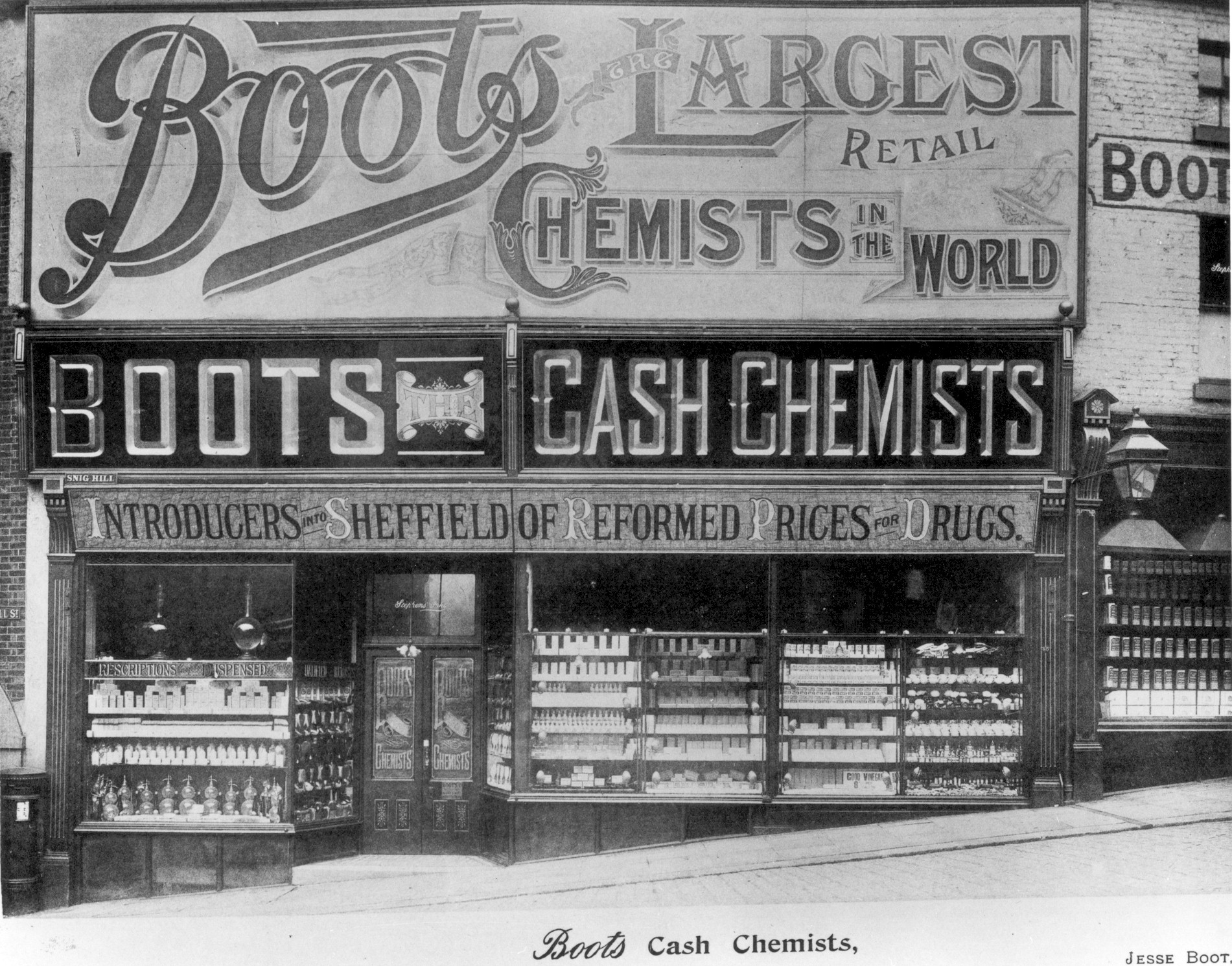 These new stores each needed a qualified pharmacist to dispense medicines, and Waring was instrumental in attracting people to come and work for the rapidly growing organisation. He used his experience in the pharmacy trade to recommend young pharmacists that would suit Jesse’s style of business, and his genial personality and popularity within the local society helped him to persuade them to come and work at Boots.

By the mid-1890s, the chemist business under Waring was well established. In letters sent to shareholders in 1895, Boots was described as having “done exceedingly well in their business as chemists – which of course is their mainstay”. However, this success resulted in considerable tension between the newly established ‘retail’ chemists such as Boots, and the traditional independent chemists.

The cut price business model operated by Jesse brought criticism from his competitors, who claimed that his medicines were of inferior quality for him to be able to sell them at such a low price - especially as Jesse himself was never a qualified pharmacist. Waring worked extremely hard to quash these rumours and enhance the professional standing of pharmacists at Boots, touring Boots dispensaries and laying down exacting standards for his chemists and apprentices. At one stage Waring arranged to have a notice hung in every single Boots dispensary which read ‘Accuracy in dispensing depends on the undivided attention of the dispenser’, ensuring all employees operated to the highest possible standards. 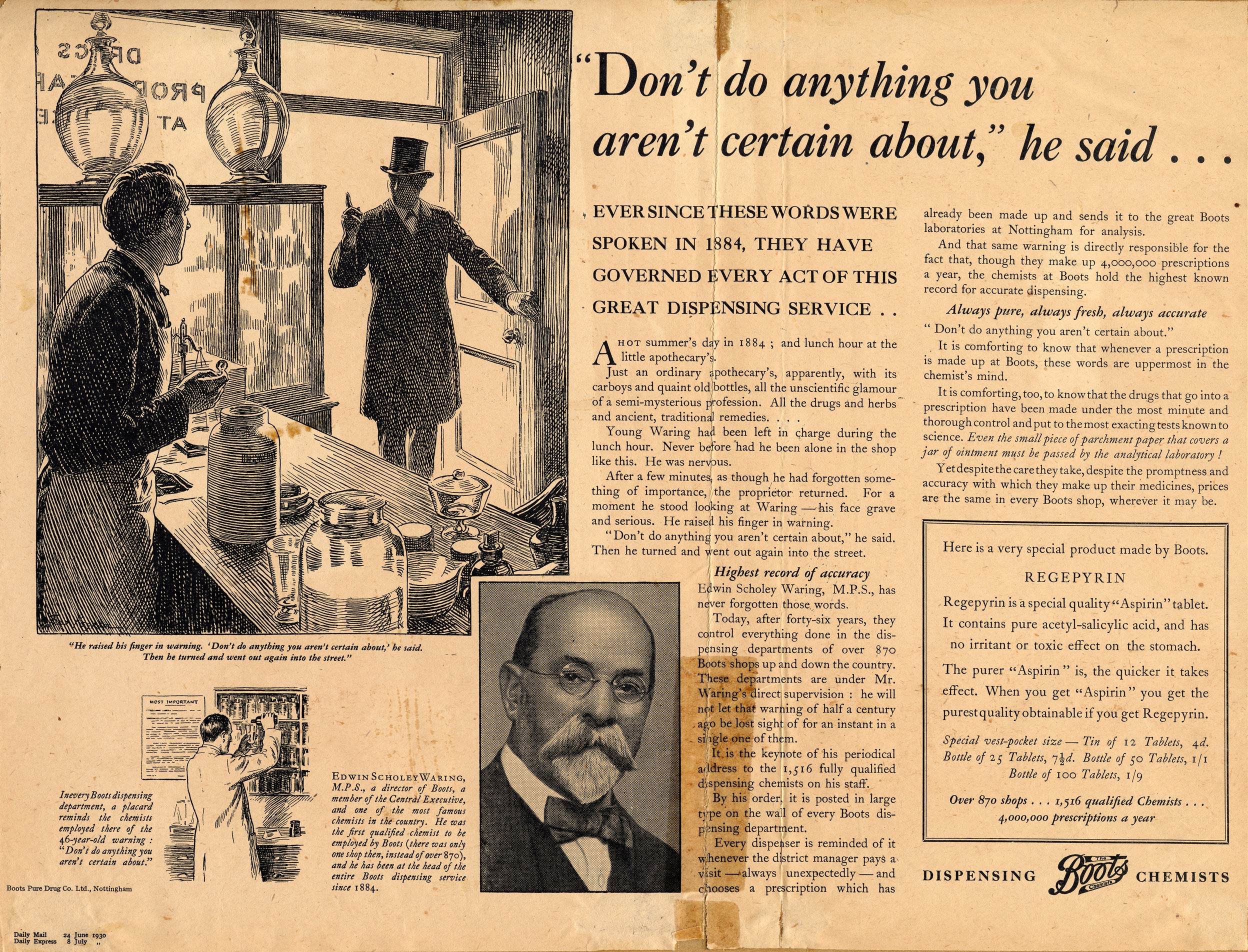 Waring also helped improve the relationship between Boots and the pharmacy establishment by using his expertise to lead national conversations within the pharmaceutical industry. He sat on a number of national groups including the Central National Health Insurance Committee of the Retail Pharmacists Union, and was elected as a member of the Pharmaceutical Distribution Committee which was established by the Ministry of Health.

Within Boots he was appointed Director of the Eastern Company of Boots Cash Chemists in 1899. Later, in 1916 he was described in a Boots staff magazine as “known throughout the world of pharmacy and his expert acquaintance with all legal matters associated with the chemists vocation is held in special repute”, and this was recognised further when he was awarded the Directorship of the Northern, Western, Southern and Lancashire companies alongside a seat on Boots Executive Committee in 1920.

Throughout his career at Boots Waring also held a keen interest in the welfare of employees, becoming heavily involved in the formation and running of a number of clubs and societies. He was one of a number of individuals involved in the establishment of Boots Athletic Club in 1894, and he had a particular interest in Boots Choral Union, where he both sang and conducted. 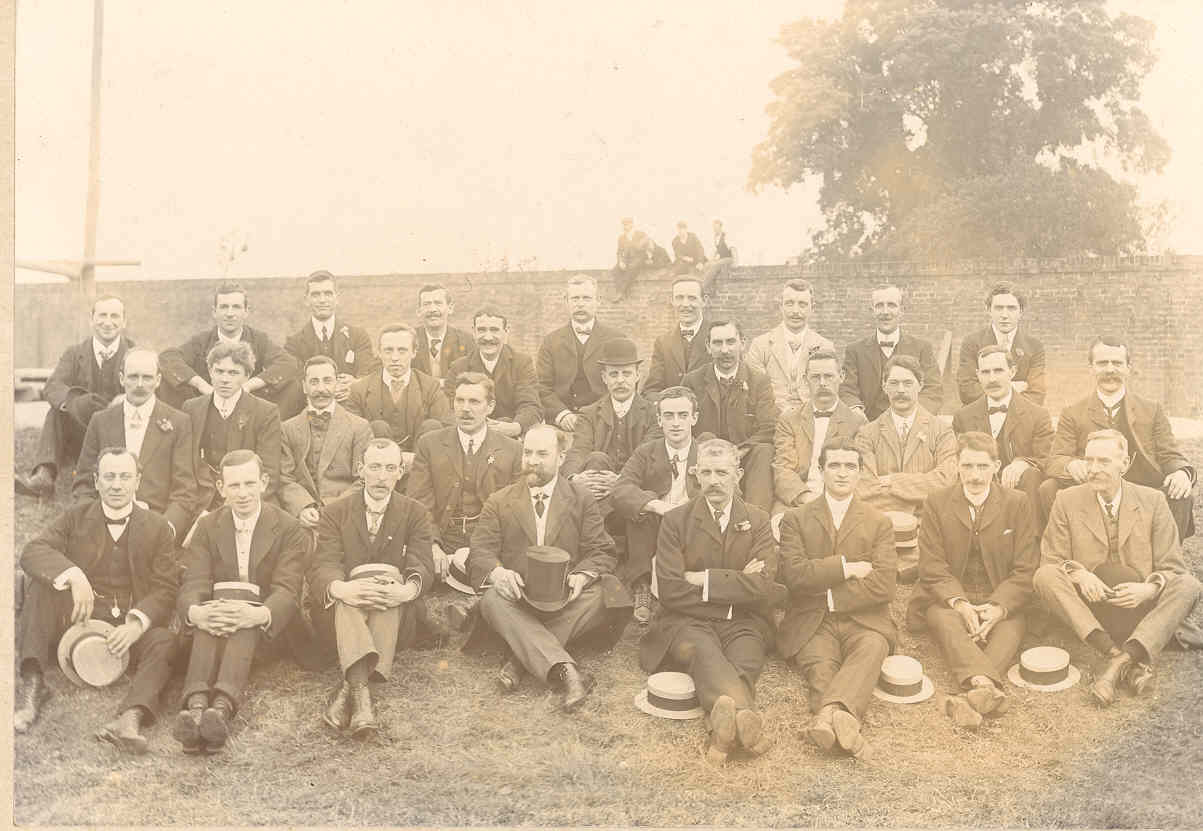 Waring retired from Boots in 1932, after 48 years working with the company and by which time he was known as the ‘Grand old man of Boots’. He died in 1937, and Boots at the time claimed that “He will be remembered as the ‘father’ of a long line of pharmacists who, brought up in the Waring tradition, have given, and continue to give, that well-informed and understanding service which is the solid foundation for that proud phrase ‘Boots, Chemists to the Nation”.