On the 24 June 2019, Boots became the first national pharmacy, health and beauty retailer in the UK to move to unbleached (brown) paper carrier bags as standard, replacing the plastic bags across its 2,465* stores by early 2020.

The brown paper carrier bags are made from unbleached, Forest Stewardship Council (FSC) certified recycled brown paper, which is printed with water-based inks so the bags can be easily recycled at home. Sourced and manufactured in the UK, the bags display the On-Pack Recycling Label (OPRL) standard, which helps consumers to recycle correctly and more often.

Customers can purchase a small, medium or large paper carrier bag for 5p, 7p, or 10p. Any profits are donated to Boots long-term charity partner, BBC Children in Need, to support disadvantaged children across the UK and so far, £129,928.47** has been raised for the children's charity.

Morag Punton, Head of CSR, Boots UK, said: “Plastic waste is an important environmental issue that the world faces today, and we recognise the active role that Boots can play in reducing its reliance on plastic. For 171 years, Boots has demonstrated an ongoing commitment to operating as a responsible business, so we’re delighted to have reached this important milestone.” 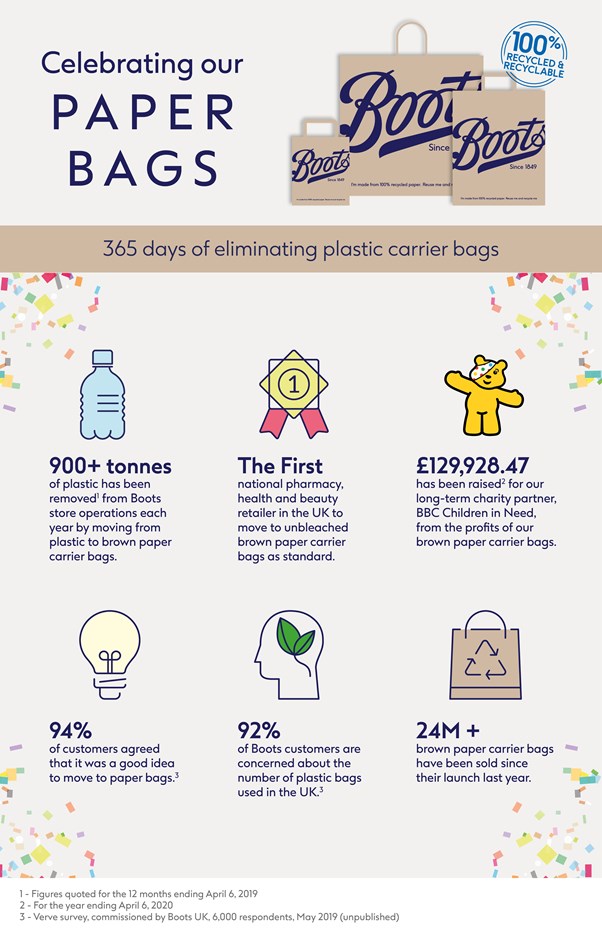