You are here: Home Newsroom Features A New Shop Window Opens into Nottingham’s Past

A New Shop Window Opens into Nottingham’s Past

“Health for a Shilling”, Boots Island Street Factory, Boots Cold cream, Brilliantine and Epsom Salts. The iconic buildings, products and adverts of days gone by are to be resurfaced and shared with the public for the first time ever through the new Boots digital archive.

The brand new online archive will hold around 20,000 entries, with a snapshot of pictures, letters, adverts, colleague magazines. This only represents around a fifth of the collection, however, with the remainder set to be added in stages over the next four years.

Sophie Clapp, Boots Archivist, comments: “We want to find new ways to reach students, teachers, and communities – particularly in Nottingham, and open up this fantastic resource to allow a new era in the study of Boots heritage. It’s such a vast and varied collection and contains a wealth of material to deepen our understanding of retail, industrial and pharmaceutical development in the UK and beyond. We know the story of Boots has so many personal connections for people in the region and we hope that as well as a brilliant new educational resource, the website will also be a place where people can explore the history of their high street or perhaps see images of their grandparents and great-grandparents, whose contributions played an important role in building the Boots that we know and love today.”

The story of the company’s development is inherently linked to the social and economic history of Nottinghamshire, where Boots first started as a small herbalist store over 165 years ago. Its archive has attracted the interest of many researchers and professors over the years who have explored the business’ approach to ‘healthcare for all’, medicine development, architecture, its amazing community spirit and pioneering industrial welfare.

This new online offering as been funded by Wellcome, which recognised the academic value within the collection and granted the Boots Archive a Research Resources Award.

Professor Peter Scott, Business Historian at Reading University conducted an appraisal of the collection and commented that it “constitutes one of the most significant and multi-faceted British corporate archives, which can make major contributions towards our understanding of British healthcare provision, changing popular notions of beauty and health, and a broad range of other issues … it would not be possible to do meaningful archival research on the history of British multiple pharmacies without access to this collection.”

Speaking at the launch event will be Sophie Clapp, and Elizabeth Fagan, SVP and Managing Director of Boots, and there will be exhibitions from local researchers, including Professor Victoria Tischler, who has been studying the effect of using archival items with patients suffering with Dementia. Using beauty and healthcare products and visual prompts from the past, Professor Tischler is evaluating the benefits of using items, textures and smells, to stimulate discussion and promote wellbeing amongst patients and their carers.

The Digital Archive also includes some items from other businesses within Walgreens Boots Alliance, with more from the global enterprise to be added over the next few years. 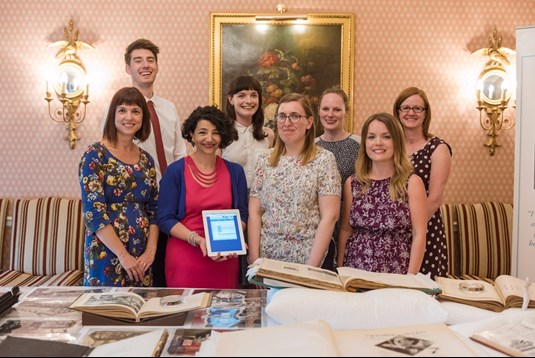 The Archives team at Boots UK

Jesse Boot has long been regarded as a pioneer in business, primarily through his offer of alternative access to medicines, his dominance in retail pharmacy, his corporate branding techniques and his philanthropy and welfare initiatives. The scale and reach of the Boots business was unique. By the mid-1930s, when there were over 1,000 Boots stores in the UK, it was dispensing five million prescriptions and serving 135 million customers a year.

Boots was uniquely placed not only in terms of scale, but also in its comprehensive approach to healthcare provision, as researchers and developers, manufacturers and retailers of health and beauty products. The company also moved into scientific manufacturing at an early stage in its development. The Analytical Department, which was set up in the 1890s as a quality control facility, was one of the first of its kind and by the 1950s employed more than two hundred people.

Boots can also claim to be one of the leading examples in industrial welfare. Provisions for employee wellbeing date back to the 1880s and became professionalised in 1911 with the engagement of the company’s first full time welfare worker. Key members of the Boot family, Jesse, Florence and their son John Boot, were well known pioneers and introduced a number of industry leading schemes and initiatives within this area. These include one of the first ‘daylight’ factories in the UK, D10 at Beeston as well as being pioneers in the introduction of the industrial five day working week initiative.