You are here: Home Newsroom Features 171 years of supporting the nation through global pandemics

171 years of supporting the nation through global pandemics

The world has become a very different place since John Boot opened the first herbalist store in Nottingham back in 1849. But one thing has remained the same: colleagues in every Boots store across the UK have always gone above and beyond to care for their local communities.

Throughout its 171 year history, Boots has helped its customers and patients navigate a number of global pandemics – from the 1918 Spanish Flu, all the way to COVID-19. Through it all, Boot has been committed to supporting the health and wellbeing of the nation, even partnering with the NHS since its inception in 1948.

We’re taking a look back through our archives to explore a few life-changing moments in Boots history, when the UK, and the rest of the world, were faced with pandemics...

As Spanish flu pandemic was sweeping the globe, Boots worked with the Ministry of Healthon a public information and health campaign. As part of the campaign, Boots ran this advertisement in April 1919, quoting The Ministry’s advice for dealing with the Spanish flu outbreak. "Our country's greatest asset is its people," the ad declares. 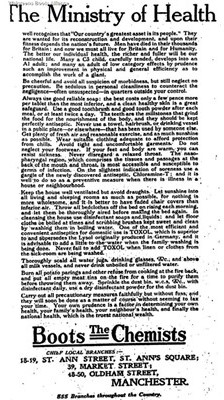 Following lessons learned coming out of the Spanish flu pandemic, Boots opened its first “Day & Night” store at Piccadilly Circus in London in 1925. John Boot stated that, “We decided that we ought to give a 24 hours’ service, seven days a week, so we finally selected Piccadilly Circus as being an address known to all, and convenient for bus and tube. Here we opened a purely chemist shop, where we have trained nurses as well as qualified chemists, and the number of customers during the nights and at weekends shows that it is much appreciated.” 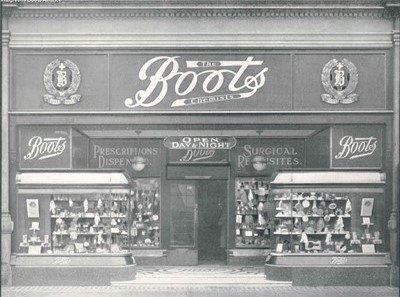 Flu preparedness continued into the 1930s and included advertising and awareness campaigns, such as the ad above from 1933. In 1936, an outbreak of the flu hit Boots itself, as an oral history account of the time describes: “Pretty well the whole of the pharmaceutical staff at Beeston factory had gone down with flu. So the decision was made to stop the course (pharmacy) and feed the pharmacists that were about to do jobs, and so I was fed into Beeston factory, the ‘Wets factory’ D10 it was then, and I stayed doing that for about a month.” 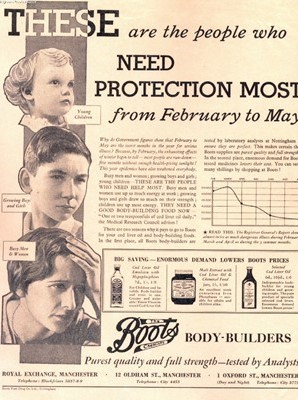 The 1951 influenza epidemic (A/H1N1) caused an unusually high death toll in England; in particular, weekly deaths in Liverpool even surpassed those of the 1918 pandemic. During the first five weeks in 1950, the Ranelagh Place (Liverpool, pictured above circa 1950) branch dispensed 20,000 NHS prescriptions. During the same period in 1951, the figure had risen to 31,000. 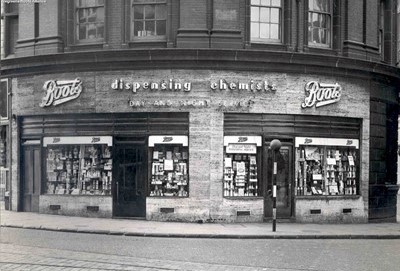 The Hong Kong flu epidemic was particularly bad during Christmas 1969. Many worked long extra periods and quite a number of branches had to extend their opening hours to cope with the tremendous demand. A number of employees, ranging from pharmacists to head office to production, spent their evening volunteering in local stores (Oxford Street, Manchester, pictured above at the time) after their day shifts to help out with the increase in demand.

In 2009, Boots produced in-store material and provided information online as the world prepared for the swine flu epidemic. Boots participated in the NHS “Flu Friend” program, through which friends or relatives could collect medicines on behalf of a customer suffering from flu. Boots worked closely with NHS throughout the extent of the swine flu outbreak. 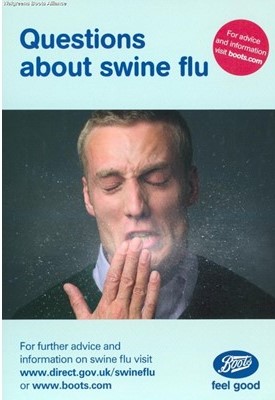 And this April, in the early days of the COVID-19 pandemic, Boots UK acted quickly, working to support the British government and the country’s NHS to set up and resource free drive-thru testing stations for COVID-19. With the help and support of specially trained volunteers from across Boots UK and the wider healthcare community, these vital testing stations were among the first ways for those who work for the NHS to get tested in the UK. 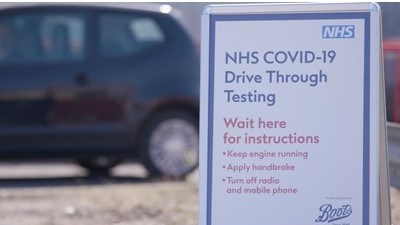