You are here: Home Our Stories Jesse Boot Plaque is Unveiled on Goose Gate

Boots UK hosted a commemorative event on Tuesday, celebrating its roots in Nottingham, while officially unveiling a blue plaque, awarded by the Nottingham Civic Society in honour of Jesse Boot and his contribution to the City of Nottingham.

The event was held in the first store to be acquired by Jesse in the 1880s, where the plaque will be permanently displayed. The celebrations included the official unveiling, led by the great granddaughter of Jesse and Florence Boot, Emma Houston, and the Lord Mayor of Nottingham, with speeches from key attendees. 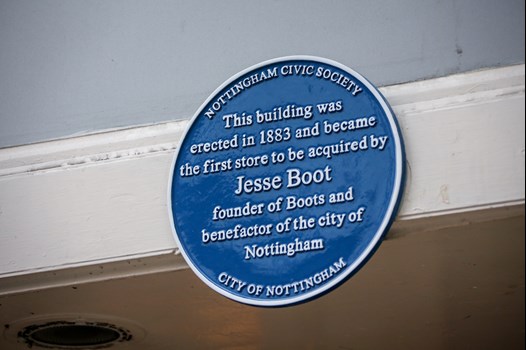 The histories of Nottingham and Boots have been closely intertwined since Jesse’s father, John Boot, first set up a small herbalist store on Goose Gate in 1849.

John’s mission was to bring healthcare to the working poor in Nottingham, by offering customers an alternative to traditional medicines by opening the city’s first herbalist store.

Following John’s death aged just 45; his business was left to his wife, Mary and young son, Jesse who was ten at the time. When Jesse turned 21, he became a partner in the business. His father’s philosophy had a profound effect on Jesse, who wanted to make medicines available and affordable to all. In 1883, he opened a much bigger store – in this very location on Goose Gate, where he would bulk buy medicines to offer greatly reduced prices for his customers. It was in this shop too that Jesse employed his first pharmacist, thus planting the seeds of the business we know today. As well as pioneering business techniques, Jesse also created a retail environment which was well ahead of its time. Lavish window displays, a passenger lift, customer toilets and multi-level store showrooms were all distinctive innovative features of Jesse’s Goose Gate store.  Its success encouraged him to open further stores across the East Midlands and beyond. 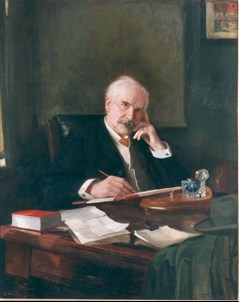 Jesse’s philanthropic attitude towards healthcare solutions for the poor was visible in his care of his workforce, and as the business expanded, to the city of Nottingham as a whole. He strongly believed in protecting green areas and open spaces for the public’s enjoyment, donating the Highfields Estate, now home to the University of Nottingham to the city, as well as opening Britain’s largest outdoor swimming pool of the time, and several libraries - most notably, the Boots library at Nottingham Trent University.

In his later years, Jesse declared: “It has been a privilege and a duty to do what lay in my power for the benefit of Nottingham’s citizens and for future generations.” In 1929, Jesse Boot received a peerage in recognition of his community work, and he chose the title Lord Trent of Nottingham.

Sophie Clapp, Company Archivist, Boots UK, said: "We're thrilled that Nottingham Civic Society is recognising the significance of the origins of Boots by commissioning this blue plaque. Despite his humble beginnings, Jesse Boot had an enormous impact on Nottingham and the benefits of his industry and philanthropy are still felt today”

Hilary Silvester, Executive Chair, Nottingham Civic Society, said: “Jesse Boot is undoubtedly one of the fathers of modern Nottingham and it is good to honour him at the place where he laid the foundations for his commercial success and through it the good works which he created throughout our city.”

Boots UK will also be hosting a joint talk with the University of Nottingham on the legacy of Jesse Boot on 19 November 2015 at The Larder restaurant, with key speaker, Sophie Clapp, Senior Boots Archivist.

Please contact Bethan Simmons at the Boots UK Press Office on 0115 959 1188 or bethan.simmons@boots.co.uk for more information and to confirm your attendance.