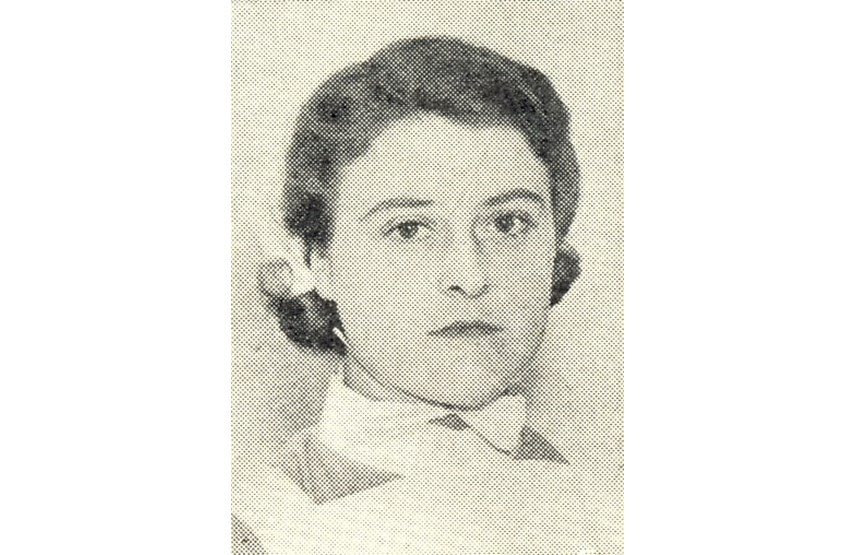 The seventh instalment of the ‘Boots Hidden Heroes’ campaign celebrates the career of Nurse Vera Anderson, who was awarded the George Cross Medal in 1941 for the part she played in rescue work during an air raid on Nottingham City centre.

Vera Anderson first joined Boots as a clerk, but quickly transferred to the Surgery department in 1932 due to her special interest in nursing. She left Boots in 1934 to commence training at Nottingham General Hospital, where she was awarded the prize for the best all-round nurse of the year in 1938. After taking her Final State Registered Nursing Examination, she qualified for a one-year’s scholarship for training under the Central Midwives Board, and completed six months in Leeds and a further six months at Worcester, qualifying again in early 1940. Following this she returned to work at Nottingham General Hospital, before eventually re-joining Boots in August 1940.

On the evening of 8th May 1941 the training that Nurse Anderson had received was called into action when Boots Printing Works was virtually demolished during one of Nottingham’s worst air raids of the Second World War, with four civilians losing their lives. 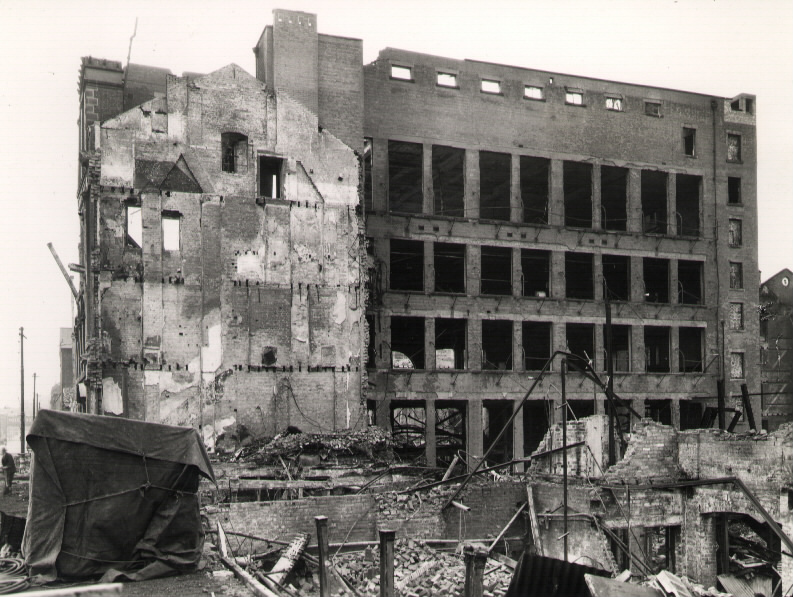 Nurse Vera Anderson demonstrated extreme bravery during the attack, battling through burning debris to give first aid to the injured, and as a result was awarded one of the highest civilian awards for courage - the George Medal.

The whole incident was recorded in Boots staff magazine, The Mixture, in 1941:

‘Nurse Vera Anderson was on duty in the surgery of a large building where her post was situated. The alert had gone and incendiary bombs clattered across buildings over the road. Nurse Anderson received an urgent call from one of the night watchmen to go down. She snatched her first-aid kit and went below.

“Buildings to one side were steadily blazing” she said, “so I put down my bag and went to telephone Control. I tried two numbers and while I was waiting I felt that something had hit the building. I was going to try another number list when I found that one of the night watchmen nearby was seriously hurt”.

“I dropped the telephone and went to him. He kept me busy, and I asked one of the other men to see to the phone, but they came to tell me that the wires were all down. We had to do something about that man. I needed hot water bottles and a hot drink and I could only get them from above. One of the men went upstairs again, and we got blankets, hot water bottles, and a kettle of hot water”.

“I was carrying this downstairs when I felt the building shiver again and I was thrown against the wall. There was a lot of noise, but I can’t remember everything distinctly”.

The buildings were by this time blazing like a huge torch and lighting up the sky for miles. She stuck to the side of the injured man and obtained the assistance of fire watchers, who produced a door which had been blown off. On this, they conveyed the casualty to a shelter some distance away under the railway arches. They had to clamber over debris on the way and burning material was falling all the time. Their way was brightly lit by flames which entirely surrounded them. It was by their light that she continued her treatment of the dying man in a desperate effort to save him.

The man died, and she had one object then – to get to control. The way she had come was impassable and, making a half-mile detour alone, she succeeded in reaching her goal. She was grimy with charred dirt and mud so she washed and immediately set about the task of treating the casualties at the control centre.

She had been constantly on duty since 8am, worked all the way through the night and was sent away at mid-day the following day, but within two hours she was back again.

Following the incident Nurse Anderson asked a reporter from the ‘Nottingham Journal’ – “What’s all the fuss about? I was only doing my job”. The reporter claimed that Nurse Anderson had been ‘faced with a task as gruelling as any with which she will wish to meet, with stout courage and outstanding devotion to duty’. 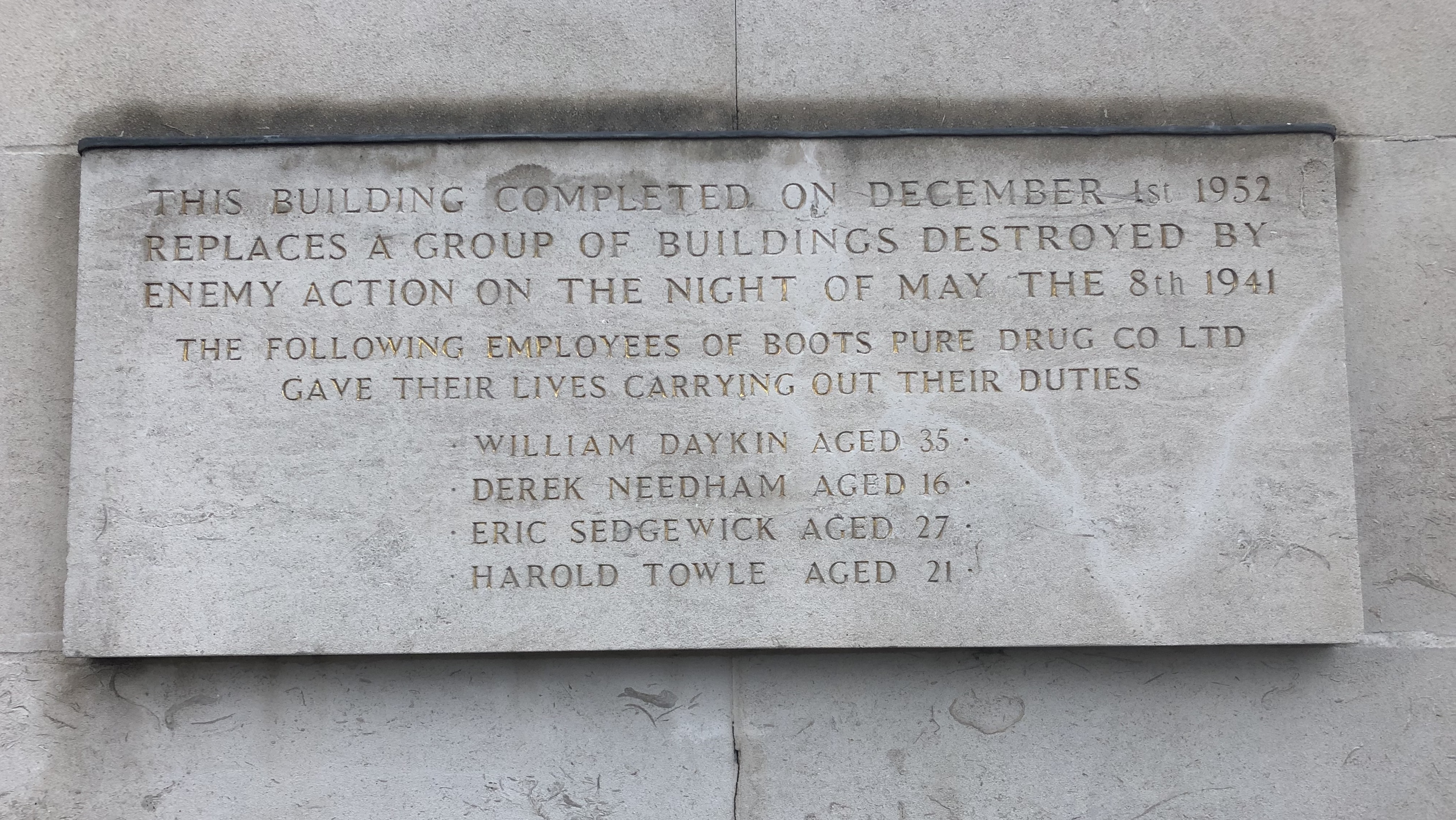 During the incident four Boots employees lost their lives: William Daykin, Derek Needham, Eric Sedgewick and Harold Towle. They are commemorated on the outside of the rebuilt Printing Works, which is now occupied by Capital One.

Throughout the conflict almost 7000 Boots employees served in the armed forces, with 381 tragically losing their lives.